The kids and I indulged in some good old fashioned home baking for the Queen's Diamond Jubilee this weekend. We also cheated, and bought a ready-made flan base for our Union Jack flan. But the cakes were all our own work, and we had a great time making them.

Yesterday we enjoyed a Jubilee inspired 'big lunch', we invited my sister, brother-in-law, niece and nephew round to ours and together we enjoyed a traditional Sunday roast. We had a big joint of beef, and also some chicken for the littler ones and we sat and ate our meal while the Diamond Jubilee Flotilla on the River Thames was on the television. We had a lovely day despite the rain, the kids managed to get some play time in out in the garden before the heavens opened.

Here is the flan, which I also posted yesterday as my Silent Sunday photo. Ready-made flan base, I whisked up some double cream and filled the base, and then washed the strawberries and blueberries before chopping them up and arranging them on top of the cream. It was delicious I have to say. Simple, but effective. 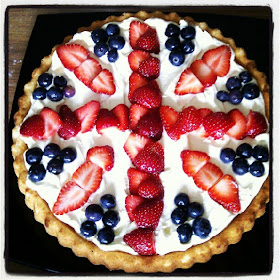 We also made some chocolate cupcakes, topped with piped vanilla buttercream roses and sprinkled with red, white & blue sugar strands and also a little edible glitter. Harrison is a dab hand at sprinkling!

In the blue cases are our mini Victoria sponges. These were primarily Joshua's handiwork, he measured the ingredients and mixed it up into a batter and then we worked together to decorate them by splitting them in half and filling them with strawberry jam and the leftover whisked double cream from the flan. On top we sieved over some icing sugar, before splodging on a dab of double cream and arranging some strawberry slices. 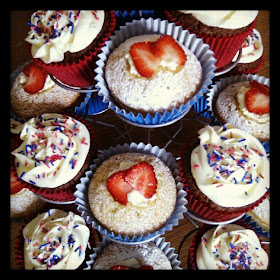