When you have a child you hope that everything will be all right. You are aware of all the risks, but still, you hope. You hope that your pregnancy will be successful and healthy, you hope that you will deliver a healthy baby at the end of nine months. As I said in my Great Expectations entry, you can hope, you can dream, but it doesn't always go to plan and you are never quite sure what life is going to throw at you next. You are venturing in to the unknown and hoping that you can find your way.

Logan was born weighing a healthy eight pounds nine ounces, nine days overdue at 2.20pm on August 19th 2003. Blonde hair, blue eyes. He was angelic looking, a really beautiful baby. He's growing up in to a handsome young man who has moments of sheer comedy genius, he is so smart and so funny and while he has challenges to face every day, he seems to come through it smiling and takes everything in his stride. 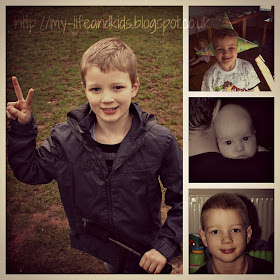 But there are times when I sit in the bathroom crying (this morning being one of those times) because we've been given yet more bad news, more tests, more appointments, more things to make him stand out even more than he already does. When I gave birth to him I wanted him to lead a full, happy and healthy life and all that seems to happen lately is setback after setback. Tests followed by tests followed by questions that never seem to get answered. We get bounced from specialist to specialist and never really find anything out, never quite get the answers we need. I don't want him to see me cry. I don't ever want him to think that it is him that is making me sad. Because it's not, it's everything that he has to deal with that is making me feel sad, and I will cry all his tears for him so that he doesn't have to feel any more pain.

I want him to spend his days smiling. I am thankful that he is mostly oblivious to the way he is treated by a lot of people. Those who exclude him from birthday parties because they think he's weird or doesn't behave like a typical kid (the sad thing is, it is the parents who implement this more than the children a lot of the time). Those who won't play with him because he doesn't ever quite understand their game. The kids who won't invite him to play football because he can't run like they do, he doesn't have the ability to kick the ball or keep up with them. The world can be a cruel place for people like Logan. Being made to feel like being different is something bad. Being ignored, being completely misunderstood, being ridiculed for seeing the world in a different way, for dancing to a different tune. I willingly bear the pain of that knowledge for him, I never want him to know how nasty and ignorant people can be and I will protect him from that with every last breath in my body. I hope that one day, everyone will see him the way I do and accept him as he is.

I want him to keep hold of his positive outlook. He starts his days by getting ready for school, pulling on those boots that are large and cumbersome and uncomfortable because that's what he has been told to do to make his legs better, to help him walk properly. He doesn't complain (often), he just does it. He gets on with it, he accepts that that is what has to be done. When he went for his MRI, he did as he was told and was still while he was scanned, he lets us stuff him in to machines, poke him, prod him, pull his legs around without question. He goes through so much and never does that smile of his falter. I hope that one day he will be able to stand tall and walk without discomfort like he does now.

So right now while I sit here and wait for yet another phone call after chasing up results for the MRI that has once again thrown up more questions than it has answers, the thing that keeps me going is picturing his little face. Knowing that he is relying on me to get him the help he needs, and to fight for the acceptance he deserves. I hope that soon we will have some real answers. And even though it is breaking my heart, I will keep going tirelessly until we do.
mamaowl at 12:25
Share