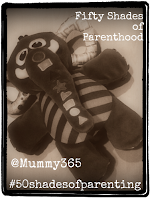 They stood opposite each other in the bedroom, She looked at him from across the bed and roughly pulled back the sheets, keeping her gaze firmly locked on his deep blue eyes as he stood watching her, clothes balled up in his hands.

The scent hung in the air, the knowledge of what had just occurred weighed heavily on them both. All traces had to be removed, but the memory - they both knew - could never be erased.

She removed the sheets from the bed, and sighed deeply. She knew what she would have to face in the morning, the regret she felt for allowing it to go this far. She had known better, but it had happened anyway, and she knew all too well what the consequences were. He stared at her, sharing the burden of knowledge and responsibility. This could not be undone.

"That is the absolute last time I let him pick his own food from the buffet, I should have known this would happen. I think he must have chosen all of the sweet stuff and now he's thrown it all back up" she said, continuing to strip the bedsheets. "The smell is going to linger in here for days".
"Why is it always in the middle of the night as well? Don't worry about putting the wash on yet, it's 4 o'clock. Let's just put it all in the bath and do it in the morning". He replied, leaving the room to discard the vomited-on PJs in to the tub.

She took some fresh pyjamas for their son from the drawers and dressed him, while her husband made up the boy's bed with clean bedding.

At the next party, there would definitely be a two cupcake maximum.