Wow. You know you never really notice your kids growing up when you see them every day. You are aware of it of course, you note each milestone, watch them learn and grow, see them blossoming in to their own little characters and personalities, but it isn't until you look back at pictures of them and think WOW. Where did my babies go? 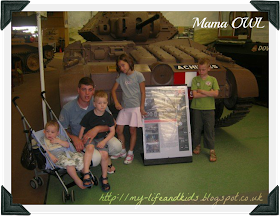 In 2007 we took a camping trip to Osmington Mills in Weymouth, a basic campsite just on the outskirts of town. A field, with a shower block essentially. Well maintained and a nice place to stay, I might add. We had not been graced with Erica's presence, she didn't join our little family unit until 2010, so it was Adam and I, and the four 'big ones'. My word, they look so little in the pictures! Now they're (almost) 14, 11, nearly 9, and 6½, it seems like time has whizzed past without me really being aware of it.

Seeing the difference between the photo of the husband & kids at the tank museum, to the one taken last week at the barbecue (below) is almost startling (maybe because they're actually smiling in the most recent one!). I really hadn't realised how grown up they all had gotten.

Although it does pain me slightly to realise that my husband has hardly aged at all... *grumble* 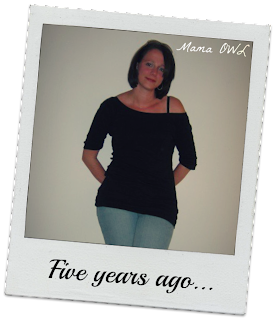 In 2007 I was about one and a half stone lighter than I am now and had short hair. I also had fewer wrinkles & worry lines and no grey hair. Oh what five years and another kid can do! I spent a week sunning myself (rather burning myself and coming back with a horrendous prickly heat rash) on the isle of Crete, which is where this picture was taken. I did warn you about the burn, sporting a nice glow here. I have definitely aged but not in a bad way. I think I look better now than I have ever done. I mention my upcoming 20-10th (*guffaw*) birthday with mock horror at "getting old" but I have to say I am actually rather looking forward to it. I have a beautiful family and a nice home, and I am happy and healthy. What more could I possibly ask for? Here's to the next five years - and all the years beyond!
mamaowl at 12:00
Share