Next week my eldest son Joshua will finish his Primary school career. Just six short weeks later he will be starting a new phase of his life, as a Secondary school student. The next five years will shape the man he will become, choose the dreams he will pursue, decide the path he will follow.

I have watched him grow up from a bonny blue-eyed, blonde-haired baby boy in to a handsome young man. He's overcome many obstacles already with his hearing & ENT issues and has grown up to be a lovely, polite and caring boy, and his Dad and I are very proud of him. I can't believe this time is here already, my little boy is almost a teenager! 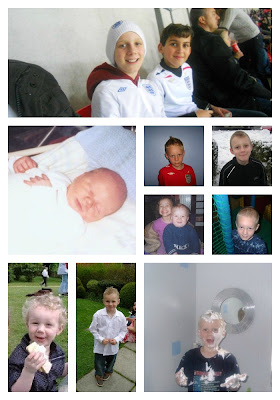 We are looking forward to helping him grow and learn and to continue making good choices (and probably several bad ones) once those teenage hormones start kicking in. He's already stopped letting us cut his hair and is currently "growing it", in to what we are not entirely sure but currently it resembles a boom mic. Alicia assures us that she is capable of styling it into something 1D-esque (you know, that flicky thing they're all in to) until he becomes more adept at it. We hope this happens soon because until then it is us that have to be seen out in public with him... 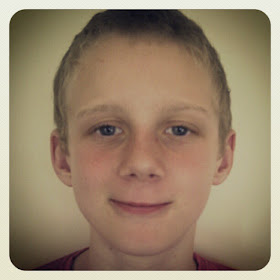 I admit I am dreading the times when he hates me, when I am so unfair, when I am the worst mum everrrrr, when I never let him do anything, when I am SO MEAN, when all his friends are allowed to do something that he is not. But in amongst those times, will be the moments that really matter. Seeing him at Football covered from head to toe in mud and beaming because he has just scored a goal, meeting a girlfriend for the first time, watching him go off for his prom night, standing by his side to open his GCSE results. Those are the times that will be worth every minute of teenage angst, and I cannot wait to experience them with him.