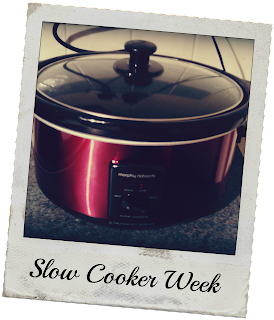 Here are all of the recipes I am using for Slow Cooker Week... Enjoy!

Monday's Chicken Cacciatore is a Slimming World special and can be found by clicking this link here (opens in a new window). Great served with mashed potato or rice, and also just as tasty on its own.

Tuesday's Spaghetti Bolognese recipe is nice and simple (this recipe serves six - two adults, two teens, two smalls - adjust for your own needs)...
Wednesday's Crock Pot Barbecue Chicken I am so excited to try because it sounds DELICIOUS. I can't wait to taste it. I found this recipe on the Morphy Richards website.
Place your chicken pieces into the slow cooker. Stir together the barbeque sauce, vinegar, pepper flakes, brown sugar and garlic powder. Pour this over top of the chicken and give it a stir. Cover and cook on low for 4 to 6 hours.

Thursday's Spanish Pork recipe also came from the Morphy Richards site.
Fry the pork and bacon until lightly browned and place in the slow cooker dish or casserole dish, fry off the vegetables in olive oil until they are soft and turning golden, add to the pork. Deglaze the pan with the stock and add to the casserole dish so the meat and vegetables are just covered.
Add the paprika, chilli pepper and Worcestershire sauce and stir.
If you are preparing ahead you put the casserole in the fridge for up to 24 hours before casseroling or slowcooking – I put it into the slow cooker from chilled on high for an hour and then turn down.
Cook in a slow oven for up to 3 hours or in the slow cooker all day. Half and hour before serving stir in the orange zest. If need be thicken the casserole with a little corn flour – to do this put 2 teaspoons of corn flour into a small bowl (I use an espresso cup), add the sauce from the casserole to the cornflour and stir to make a thin paste. Add this paste into the casserole and stir. By adding the sauce to the flour and mixing; rather than the other way round you will not get any lumps.
Serve the casserole with green vegetables, mashed potatoes or beans or crusty bread.

(Friday is Fajita night, so on to...) Saturday, we're having Slow Cooker Shredded Barbecue Beef and this recipe was courtesy of Tesco.
Turn the slow cooker on. Cut the joint into two pieces. Heat a large frying pan with one tbsp of the oil. Season the meat and sear on all sides. Place in the cooker.
Using the same frying pan heat the remaining oil. Add the onion, season and saute for 5 minutes. Add the remaining ingredients and mix together.
Pour over the meat and cook for 4 hours on high or 8 hours on low. Do not remove the lid during cooking or it will take longer.
Remove the meat from the cooker. Shred the meat with two forks. Pour any excess off from the sauce and mix with the meat.
Serve the meat on toasted buns with rocket, tomato, peppadews or sliced pickles and red onion slices.

And on Sunday, the husband cooks our roast so it is down to him whether or not he uses the slow cooker for the gammon (ham).
mamaowl at 06:00
Share