One of my most hated jobs is the quarterly sort through E's wardrobe for things that she has outgrown. It's just tedious, and seems to take forever. It's one of those jobs that you start with gusto, and then once you are halfway through you wonder why you started. Yes, that.

Anyway. I sifted through her wardrobe, flinging things that were outgrown and worn out over my shoulder with wild abandon. Ruthlessly binning socks that had lost their partner, and old jimjams that were frankly on the too small side and definitely past their best. Some things were sorted in to the 'selling on' pile, others ended up in the 'clothes bank' pile, some simply went in the bin.

I got to the end of this chore and was very pleased with myself. Until I realised that she then had no clothes left. Plenty of things I would call 'play' clothes, clothing she can wear in the garden and I'm not all that bothered about her getting covered in who-knows-what. She has lots of summer dresses too, but frankly this weather has been appalling and they've not had the wear they could have. But she has nothing to last through the autumn and winter, to take her up to her birthday (April) in the very least.

This meant only one thing... Shopping.

So, I got online and I got spending. Not too much, you understand, because I am actually quite poor, with all these kids who constantly want feeding (seriously? EVERY day?) and I used my saved topcashback money (which I save for this purpose). So I have picked a bunch of mixy-matchy things that will hopefully see her through to April with no trouble. These things mixed with her 'play' things, we are now pretty much all set until she's three. I also used topcashback (natch) and some promo codes to save myself some money. 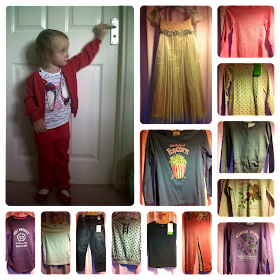 The gorgeous dress is a preloved (aka second-hand) Monsoon one that I bought for £4. Pictured underneath the dress is her Mini Boden long sleeved 'Popcorn' t-shirt that I bought in the sale for £5.

I've spent about a hundred pounds, which all considered I think is pretty good, especially as I am not planning on spending any more (except perhaps for a few pairs of tights and a pair of winter boots when the colder weather sets in) until April next year, and I got rather a lot for my money too.

H&M have two discount codes running at the moment - 1304 gives you £5 off your order, and 9921 gives you 25% off one item (valid at time of writing this entry, I cannot guarantee expiration dates, you'll just have to try them & see).

Luckily teen spent all of her birthday money on clothes (works for me!) and the three boys are all set with numerous pairs of jeans, trackies and hoodies that will see them through for a good while yet. Mostly they just sit around in their grundies anyway, they're in training for when they're men...  ;)