We set up this game in the living room ready for our ritual Friday family game night and all took our places ready to play.

My first thought when we opened the box was what a relief not to have the flimsy paper money! The money in Monopoly Millionaire is made from a good robust cardboard, and even has a little bank complete with plastic holder to set it up in the middle of the board. Nobody has to be the banker which means the responsibility is shared out between everyone, much better in my humble opinion. Someone does have to take charge of the property cards but that was easy enough with them just set out next to the board. 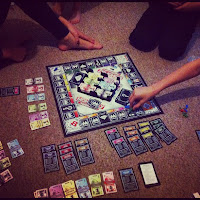 You travel around the board by taking it turns rolling the dice, and can upgrade your counter when you pass go, so for example your scooter can level up to a moped, and then a motorcycle to reflect your 'millionaire lifestyle'. The gameplay is much the same as original Monopoly - pass go, collect money, buy properties and build houses, collect rent when other players land on your properties... But the winner is the first player to a million.

This game was great for H & L, when they rolled the dice they looked and counted up how many spaces they could move, and counted out their own money when paying rent and buying properties so it ended up being quite educational as well as a lot of fun. L unfortunately lost interest halfway through playing, but this was not to do with the game, but his special needs. Frankly I was rather impressed that he lasted as long as he did, it really captured his attention for a long time and he very much enjoyed playing. When he was no longer actively taking turns he continued to help H with reading the cards, counting his moves, and with his money. 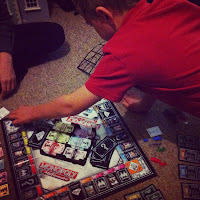 This was a really nice game to play as a family, and we even got E involved by getting her to hand money to the other players when we were paying 'rent'. It's quite a long game, so make sure you have plenty of time to sit and enjoy it and if you have smaller ones, get them involved too or wait until they're tucked up in bed for you to enjoy this with your older children otherwise you might have a bored toddler after a while ;)

Monopoly Millionaire is recommend for ages 8+, but H (who will be 7 next month) was more than capable of playing with just a little extra help. It's currently on offer online at Toys R Us for just £13.98 which personally I think is a bargain. A great family game for all to enjoy.

** Disclaimer: Toys R Us sent the Monopoly Millionaires game free of charge for my family to review as part of the 2012 TRU Toyologist program. The views shared are my own honest and personal opinions of the product.

I can't even begin to describe L's glee when he saw this in our second box from Toys R Us, he was absolutely over the moon.


L is the oracle on all things Moshi Monster and has built up his own little collection of Moshlings that he totes around the house with him to play with. He has been carrying them around in a little tin and so is beyond thrilled to now have a proper little Moshi Home to play with them in. 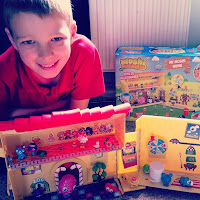 Assembly was simple, and he was able to easily pop together the little add-ons such as the mirrors and wheel by himself, and to change the floor panels as and when he chose. He thoroughly enjoyed decorating the house to make it exactly how he wanted it by adding the stickers to the house. To be perfectly honest I didn't get much of a look in here, this was all his and he has absolutely fallen in love with it! 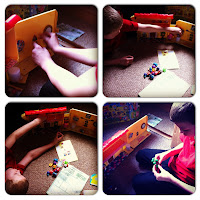 The only problem I think I am going to have with this is getting L to share it with his siblings! My Moshi Home is available from Toys R Us priced at £39.99, and is recommended for ages 4 years and up. It comes with 20 accessories and includes a secret code for a limited edition Moshling online. There are quite a few little bits and pieces which might be fiddly for smaller fingers when it comes to customising the house, but besides that I can't fault this for the sheer amount of enjoyment L has had from it in the few days that it has been here.

** Disclaimer: Toys R Us sent the My Moshi Home free of charge for my family to review as part of the 2012 TRU Toyologist program. The views shared are my own honest and personal opinions of the product.

All three of the boys have been battling over this one, each of them wanting to have a turn! It is a very cool toy, I was dubious of its flying capabilities having seen a few toys of this kind before that never quite worked as well as you hoped, but I have been pleasantly surprised by the Air Hogs Hover Assault. 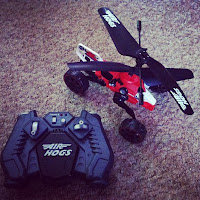 It's a little tricky to master in the beginning but once you get the hang of it, it is brilliant fun to play with. The boys are slowly mastering how to fly it and hover, it's just the landings we are still working on and a few crashes have been had (one of them in to poor Miss E who was sleeping on the sofa at the time). I recommend making sure that you have plenty of space when trying this out initially, and that there is nobody underneath it when flying! It has been withstanding the crashes very well and is very robust, which is surprising considering how small and light it is. You expect it to be quite flimsy and break easily but that has not been the case at all, it's very sturdy. It can be driven, flown, and controlled to hop over obstacles as well as fire four missiles.


I captured a short recording of J flying the Air Hog to show an example of how well it works, this doesn't really do it justice as it is capable of much more. He and L in particular are getting very good at flying it now, so you have to be sure to duck when you enter the living room in the Mama Owl house as it is often whizzing around the ceiling.

The radio controlled Air Hogs Hover Assault requires 6 x AA batteries and must be charged before first use, which is quick and simple & done by via wire connection from the controls to the vehicle. It is recommended for ages 10y + and is available from Toys R Us, priced at £49.99.

We really like this toy, and will soon be taking it out to fly in the great outdoors now that we have a better handle on the controls! A big thumbs up from us.

** Disclaimer: Toys R Us sent the Air Hogs Hover Assault free of charge for my family to review as part of the 2012 TRU Toyologist program. The views shared are my own honest and personal opinions of the product.
mamaowl at 14:30
Share