As if it wasn't perilous enough living in a house with five children, Toys R Us sent us the Nerf N-Strike Elite Hail-fire Blaster to review as part of the 2012 Toyologist program. My children were absolutely over the moon.

Cue much maniacal giggling from around corners, behind sofas and the nooks and crannies around the house, if you hear a whirring noise then I recommend you duck or run because the likelihood is, you're about to get nailed with a Nerf dart (or six).

To ensure that it was suitable for the children *ahem*, naturally I had to test the Hail-fire out myself, and I thought the best person to test it on was of course The Mister. Next time I call him to the living room, I imagine he either won't come or he'll have fashioned some sort of shield. Where is the trust?! (Probably long gone, after I unloaded an entire clip of darts in his general direction as soon as he entered the room...). For safety reasons I must recommend that you do not fire the darts AT anyone. Yes. You must never do that...

The Blaster is designed with a rotating ammo rack and comes with 4 'clips' and 24 elite darts, and has the capability to hold up to 8 clips and 144 darts (available separately). There is an air-assisted acceleration trigger powered by a motor (batteries required, not included) which gives you a range of up to 75 feet. The motor also gives you time to get out of the way because it makes quite a loud whirring noise. The case around the ammo rack doesn't fix on to the Blaster particularly securely and tends to slide down or off if you're not careful, but that doesn't affect the Blaster or use at all.

The Blaster has the potential to provide lots of fun for those who enjoy a 'battle', which my kids certainly do! The Nerf N-Strike Elite Hail-fire Blaster is currently on sale at Toys R Us for £34.99 and is recommended for ages 8+ (but 30 & 31 year olds may enjoy it too...).

** Disclaimer: Toys R Us sent the Nerf N-Strike Elite Hail-fire Blaster free of charge for my family to review as part of the 2012 TRU Toyologist program. The views shared are my own honest and personal opinions of the product.

L is the Star Wars fan in the Mama Owl house, and was pleased to see this Star Wars Phantom Menace Double-Bladed Lightsaber in the box from Toys R Us.

I have to say, I was expecting this toy to do something... light up, make noises maybe... but unfortunately it does not. What you see is literally what you get. There are several buttons on the toy but only two in the middle work to release the 'blades' that pop out from either end. You spin the lightsaber, and press the button(s) to release one or both of the blades, for a reach of up to five feet so make sure your child has plenty of room to spin it around!


The lightsaber is a basic toy without any bells & whistles, but would make a good role-play toy for fans of Star Wars, and is recommended for ages 4+. It is currently available from Toys R Us for £19.99. I think it would be better value for money at a lower price, as it doesn't offer much besides the Star Wars logo.

** Disclaimer: Toys R Us sent the Star Wars Phantom Menace Double-bladed Lightsaber free of charge for my family to review as part of the 2012 TRU Toyologist program. The views shared are my own honest and personal opinions of the product.

J and his friend N wanted to make these Bouncy Balls from Galt on a quiet Sunday morning before they left for football. I set them up at the table with the kit, plus a pair of scissors and a cup of water and let them get on with it. 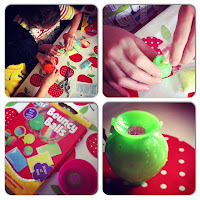 We went over the - very simple - instructions and they set about making their very own glow-in-the-dark bouncy balls, alternating between the coloured crystals to create their own unique patterns and designs. It is very easy to do and was nice for the boys to sit and do together. You simply pour the crystals in to the mould, put the mould in water for a couple of minutes and then take it out and leave it to dry for a further two minutes. Remove the mould and rinse under the tap, and voila! Your bouncy ball is ready. We found that leaving it to dry a little longer in the mould made for a better bouncy ball. 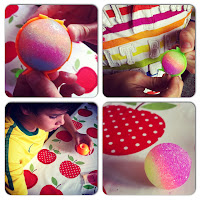 J started off by making a small one, and N a large ball. It took rather a lot of the crystals to create just one of the large balls so there was only a small amount left to make some smaller ones. We've made three little ones so far and I think there might be just enough to make one more. The kit says it contains enough to 'make two large or eight small balls'.

Galt Bouncy Balls is recommended for ages 8 and up and is priced at £6.99. This is a nice little kit and would make a good birthday gift or perhaps a stocking filler. It's very simple to do with easy to follow instructions, H and L were also able to make their own bouncy balls without any trouble so the potential age for this I think is probably 6+. 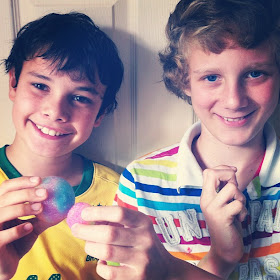 ** Disclaimer: Toys R Us sent the Galt Bouncy Balls kit free of charge for my family to review as part of the 2012 TRU Toyologist program. The views shared are my own honest and personal opinions of the product.
mamaowl at 17:56
Share