Normal is as normal does

So last week saw yet another appointment at the hospital with L, after the "appointment that wasn't" at the beginning of October. That appointment we had expected to be some MRI results (that he had had in May), maybe even some answers if that wasn't asking too much.

But no, that turned out to be yet another Doctor asking how things were going for L with his Autism and physical difficulties, a review of sorts. Bless her, the poor woman got rather more than she bargained for when I launched into my frustrated rant (not AT her, just to her) about the amount of specialists we have seen - FTR, we're at at least 10, I have genuinely lost count now - without having any actual answers as to what is wrong with his legs/spine/hips and what they're planning on doing. First it was casting, but then they were concerned about his spine and the possibility of neurological issues being linked to the deformities in his hips and legs. So, he needed an MRI but also needed to see Physiotherapists and Neurosurgeons and Orthopaedic surgeons and Orthotics specialists for shoes to try those first... Not to mention the Registrars and Paediatricians and Dieticians we have seen, speech therapists and a long line of every other bugger in the NHS and do you know, they STILL haven't given me the results of that bloody MRI.

After seeing the Physio (again) last week, we have finally been given some exercises to start him with, while we now wait for serial casting. In about a month (in time for Christmas... Brilliant) he'll be called in to start the casting on his legs. Every week for five weeks we'll have to take him back to the hospital to have his casts replaced. He'll have to miss at least four weeks of his swimming lessons (the only good thing about it probably being over Christmas is that the pool will be closed anyway) which he is so upset about. After the casting he'll have to have further physio and more orthotic shoes fitted. Then there will be more appointments to review the success of the casting, and to see what will need to follow.

We got back in to the car after the appointment and he cried & asked me why he can't just be a normal kid like everyone else, and honestly that has to be one of the single most heartbreaking moments of my life. I told him that there is no such thing as 'normal' and even if there was, he'd still have to be special because he's going to change the world one day. I reminded him of all the athletes we watched compete during the Paralympics, and explained that everyone is different and special in their own way. Because being different IS normal, and I really hope that I will live to see the day that everyone is accepted for those differences, and that L can embrace his own.

He's one of a kind, my gorgeous boy. And while I wish I could take away all his pain and difficulty, I wouldn't want him any other way. 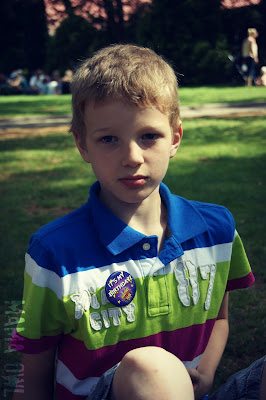