I spent almost all of yesterday in quite possibly the biggest sulk ever.

My sons, L & H, are HUGE fans of the popular CBBC TV show, Deadly 60. Steve Backshall is nothing short of a God in their eyes, we have almost the entire series on our Sky planner and H loves to sit and watch it when he comes in from school. This is of course fine with me, because it's very educational and it means that I can ogle 'Tarzan Steve' at the same time. H even had Deadly 60 cupcakes for his birthday last weekend.

A couple of weeks ago, I found out via his Facebook page that Steve Backshall was going to be doing a book signing at Waterstones in Cribbs Causeway, Bristol for his new book, Tiger Wars. Imagine my unadulterated glee at finding this out... And then my unmitigated horror when I realised that I couldn't go.

Devastated is not the word.

After I had composed myself, I immediately called the Mister to tell him, and to book him for the day so that he could take the boys. Despite the fact that I wasn't able to take them myself, they were absolutely not missing out on meeting their hero. 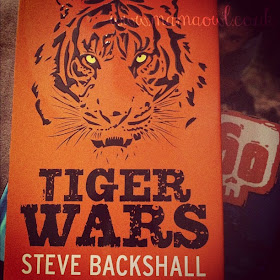 Then I had a think and realised... It was going to be rammed. As well as the army of Steve Backshall fans who would be there for the signing, it's almost Christmas. And a Saturday. As well as being like Bambi on Ice with his legs in casts, L does not tolerate a lot of noise or 'things' going on around him. A busy shopping mall for an unspecified amount of time would be absolute sensory overload. He doesn't grasp 'queuing', to him it is just standing around and he doesn't like to or understand why it is necessary. You've got a maximum of 30 minutes before he would start to kick off and once he's gone, there is no coming back. Not fun for L because it is distressing, not fun for the Mister, not fun for H who would have to leave too & miss out, and not fun for anyone who had to witness it.

Left with a dilemma, I wondered whether he should go at all, perhaps the Mister should just take H? Would it be too much for L? And then there was the safety & comfort aspects with his legs being in casts to consider. But then, I didn't want L to miss out because I knew how much he would love to meet Steve...

I made the decision to call Waterstones Cribbs Causeway and speak to a manager, to see what they thought and ask their advice. I spoke to a lovely man named Paul, and explained my predicament. He was very understanding and helpful, and offered to speak to the Events Coordinator to see if there was anything that they could do. A few days passed and I worried that he wasn't going to call back, not many people are very understanding of Autism and I thought perhaps it was going to be a bit of an ask for such a big event, we didn't even tell L & H, just in case. However on Thursday afternoon Paul called back with the news that they would be happy to reserve a seat for L, so that he would not have to queue excessively or stand for a long time. I was delighted, and just beyond impressed with their customer service & willingness to help my boy.

We told the boys that night that they were going, and they were bouncing off the walls with excitement. On the day, they got up bright & early and went off with their Dad, carrying their books to be signed by Steve. Then I got a phone call from the Mister just after 10am, asking how much I hated him... Well rather a lot actually, because he was going to meet Steve and I wasn't, but why call and ask me that? To rub it in a bit more, the git?

He was calling to tell me that the store manager and Steve's publicist had invited him and my boys upstairs for a personal meet and greet with Steve Backshall! After I picked my jaw up off the floor, I swore at him and then begged him to give Steve a big sloppy kiss from me. Tongues & everything. He of course declined, but I thought I should ask just in case. 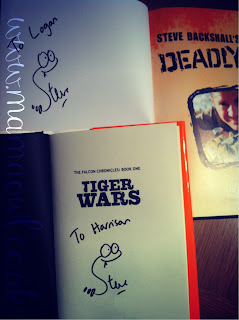 They got to spend ten minutes with him privately, and had a great time talking about gorillas and farting (the gorillas, not them) and giant wasps, so they told me. My husband got to shake his hand (and delighted in telling him that I was gutted to be missing out, Steve said he would have loved to have met me *faints*), and the boys had their books signed and posed for a photograph with him, which they now have copies of to take to school and show their friends, and one blown up & in a frame for their bedroom wall.

The Mister now has a 'man crush' on him and thinks that Steve is great. Brilliant with the boys, interested in them and talking to them about his adventures and answering their questions about Deadly 60 and the creatures he has seen. A really friendly & genuine guy.

What a wonderful role model Steve is for kids - someone intelligent, who works hard, is passionate about what he does, and about nature and conservation. Far, far better than any footballer or "reality tv" nobody, if my boys aspire to be like him then I am more than happy with that, and wish that there were more people like him on television to inspire kids. We look forward to reading Tiger Wars and the rest of The Falcon Chronicles when they are published.

I cannot thank Steve enough for making my boys day (the Mister included!) and of course a massive thank you to Paul and the staff at Waterstones Cribbs Causeway for all of their help and understanding. You have made two little boys, their dad, and their mum very happy indeed.

And as for the Mister's man crush on Steve... Back off Sheppy, I saw him first. 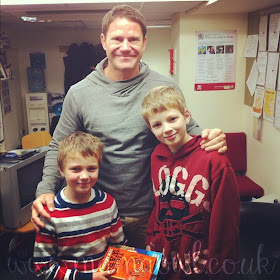 Reasons to be Cheerful is hosted by the lovely Kat A Pillar this week, link up here > #R2BC @ Kat A Pillar
mamaowl at 15:00
Share