L & H were keen to get the Redakai Championship Pack out and have a game, they love to play together but are quite competitive so this definitely appealed to them.

To be frank, I found the rules & how-to a little confusing initially as the instruction leaflet is quite 'involved' and I know zero about how these games work, the children are far more well versed in these matters! In basic terms, it is a game of skill & tactics in which your game cards (character, monster and attack) are stacked to complete 'attacks' on your opponent. You need to defeat three of your opponent's cards to win. 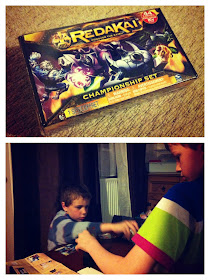 The cards are very aesthetically pleasing, the 3D effects are outstanding and excellent quality, made of sturdy plastic to withstand lots of play time. The Redakai series will appeal to girls & boys who are fans of collectibles as there is plenty available to buy.

The Redakai Championship Pack is available from Toys R Us priced at £24.99 and is recommended for ages 6+, and will probably require an adult to sit with younger children initially to explain how everything works and help set it up. The pack includes 43 X-Drives (cards), Draw Deck, Card Screen with 2 Kairu counters and Battlefield.

My boys have enjoyed playing this game together, and this is a great starter pack for this series.

** Disclaimer: Toys R Us sent the Redakai Championship Set free of charge for my family to review as part of the 2012 TRU Toyologist program. The views shared are my own honest and personal opinions of the product.

Big fans of Transformers, L & H were beyond delighted to find this Optimus Prime Transformers Prime Weaponizer in our third box from Toys R Us, which is recommended for ages 5+ and is priced at £34.99.

H took it upon himself to test this one out and he has thoroughly enjoyed playing with it, he did find it a little tricky to 'transform' initially when it first came out of its box, but after going through the (somewhat complicated) instructions with the Mister he is now a dab hand at it and can easily manage it himself.

The Weaponizer is 4-in-1 and can be played with in robot or vehicle mode, it has built in weapons with light up cannons to allow you to switch between weaponized & standard mode for both robot and vehicle, and there are also other Transformers Weaponizers to collect. 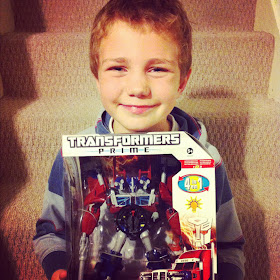 A big hit with my little man, and it has been well played with since it came out of the box by both L & H (and E when she can sneak it away!). It receives a big thumbs up from the Mama Owl household, we think that this will be a sure fire favourite for any Transformers fan this Christmas.

** Disclaimer: Toys R Us sent the TRA Weaponizer free of charge for my family to review as part of the 2012 TRU Toyologist program. The views shared are my own honest and personal opinions of the product.

Uncle M joined us once again to build the KRE-O Battleship Alien Strike after he enjoyed making the first one so much, and it was L's turn this time to oversee the construction of this model.

It is a large kit with 277 KRE-O pieces, and the end product is an alien ship and firing weapons to use with the 4 KREON figures also included. Uncle M & L spent an evening at the kitchen table building this together using the instructions. There are lots of small pieces and it was quite time consuming but the result was a good little model that can be built & rebuilt and will provide plenty of entertainment and play time. 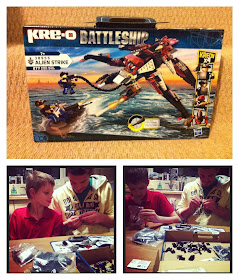 It is priced at £24.99, and I think it is good value for money, it is recommended for ages 7+ and is available now from Toys R Us. We think that this kit makes an ideal gift for construction fans (and their Uncles!), perhaps as a companion to the KRE-O Battleship Combat Chopper. Very much enjoyed by L (and H who has of course had a play with it too) though we did find it a little fiddly, so we give this four stars.

** Disclaimer: Toys R Us sent the KRE-O Battleship Alien Strike free of charge for my family to review as part of the 2012 TRU Toyologist program. The views shared are my own honest and personal opinions of the product.

The Moshi Monsters Bobble Bot House & figurine have been a huge hit with my youngest three, and indeed the older two have had their turn playing with them as well!

The house set includes one very rare moshling, Oddie (#88), as well as 4 cobblestone building tiles, 10 brick borders, garden patch, grass patches, a Scarecrow, flowers, a small bush, mushrooms, and weeds & rocks. The house also includes one foundation building tile, a door, roof, one shelf accessory as well as 3 house walls with different patterns in order for you to design your own layout. The battery operated moshlings can then 'bobble' around the garden of their own accord. There are several sets currently available and enable you to add on to and create your own little Monstro city for your moshlings to live in and explore. 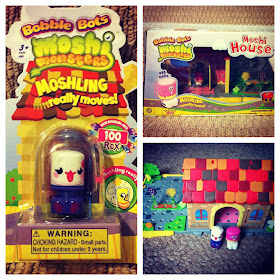 The Bobble Bot figurine pack includes one 5cm tall moshling (Kissy pictured above), and also a Rox code to use online. Moshi Monsters Bobble Bots are not recommended for children under the age of 3 due to small parts, however I did play with this with E and she thoroughly enjoyed watching Oddie & Kissy jiggle around the garden. The Bobble Bot figurines are priced at £5.99 each.

Moshi Monsters Bobble Bots are highly collectible and a must-have this Christmas for any Moshi Monsters fans, a definite thumbs up from my little Owlets.

** Disclaimer: Toys R Us sent the Bobble Bot Moshi Monster House & Figure free of charge for my family to review as part of the 2012 TRU Toyologist program. The views shared are my own honest and personal opinions of the product.
mamaowl at 08:00
Share