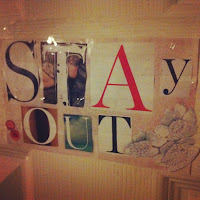 Give me toddlers over teenagers, any day. After having to give J the third degree when he has yet again waltzed through the door over an hour after when I was expecting him, and sitting up until almost 2am waiting for A to come back from a concert (that she refused to wear a coat or hat on the way to) after reading cryptic status updates like 'CRYING MY EYES OUT' (with joy, at being at the concert, which she did not say) I honestly find them quite exhausting at times. When my kids were smaller I used to complain about my lack of sleep & living room strewn with toys and think to myself  "when they are bigger it will get easier".

They are equally as untidy as they were when they were smaller, and frankly the strops and flip-outs over nothing get worse. Your two year old breakdancing & wailing like a banshee in the middle of the living room floor because they can't have a biscuit? Imagine a teenager doing the same thing over a concert/wearing a coat/going to youth club/getting a lift somewhere. Like a toddler, but a lot bigger and a lot more difficult to reason with BECAUSE YOU ARE THE WORST PARENT IN THE WORLD AND THEY HATE YOU AND THEY ALWAYS HAVE TO DO EVERYTHING.

This actually happens. This is not an exaggeration. The hormones arrive like a tsunami and soon enough Cbeebies & CITV will be replaced with emo screamo (buy ear plugs) & boy bands, and mascara so thick you'll actually be impressed by their ability to hold their eyelids open, and gangs of boys lounging around the living room or roaming the kitchen eating everything in sight. They won't wear a coat when it's cold outside because that's not the thing to do, they'd rather freeze, frankly.
They will try their luck whenever they can, they will stay in bed until they absolutely have to get up (and even then you'll probably contemplate setting fire to the bed just to see if it makes them move any quicker), you will have to ask them more than once to do pretty much anything and even though you will ruin their life on at least a weekly basis you will still be required to drive them and their friends around & fund whatever expedition they're off on, because you know they 'love you soooo much and will do everything they're told and tidy their room pleeeeeaassseeee daddy/mummy'.

I know that some of you will sit back and read this thinking "Ha! MY child will never do this, my child is too good/respectful/mature/well behaved to EVER do anything like that and besides which I would NEVER put up with it". You'll gaze lovingly at your rosy-cheeked angel playing quietly with their toys and think that this will never happen, not to your little cherub. You will laugh at the mere idea of your demure, obedient child not doing as they're told or answering back or pitching a full blown fit because they can't have their own way.

Well laugh now, and enjoy it. It won't be quite so funny when you're witnessing it first hand, because you will, even if your little angel only ever does it once, they will do it. Those of us who have been there won't laugh at you, or say I told you so. We'll just think it quietly to ourselves.

Because we told you so.