Tara at Sticky Fingers has chosen 'Girls' as this week's theme for #TheGallery. I immediately knew the perfect photo...

I snapped this photo quickly on my mobile phone the day that A met E, the day after E's birth. After three little brothers, A had been so desperate for a baby sister.

We came home late at night after some begging to the night staff on the ward, there had been mec present when E was delivered and she had to stay for 12 hour obs, which meant that it was midnight before we could be discharged. The lovely midwife took pity on me as I was dying to get home to be with the children and she signed us off so the Mister could take us home.

The kids were all tucked up in bed asleep when we got home so they had no idea we were there until A came in to our bedroom and found E snoozing in her moses basket in the middle of the bed early in the morning. I woke up to A sitting at the foot of the basket sobbing happy tears at seeing her new sister for the very first time. A had to leave to catch the bus for school, but I handed E over to her and took a quick pic before she left. 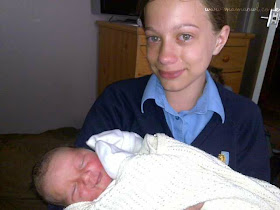 The first picture of my two girls together, the first of many, and one of my favourites.