While we were away, A & J wanted to have a go on the dry ski slope at Dorset Snowsport Centre. A is a semi-experienced skier having spent a week skiing with the school in the French Alps a couple of years ago, whereas J has never even seen a ski never mind worn one, and he was keen to give it a try in case he fancied going on the ski trip next year.

They pulled on their gloves and warm clothes (because it was FREEZING out last Saturday) and kitted up ready for a couple of hours on the slopes. 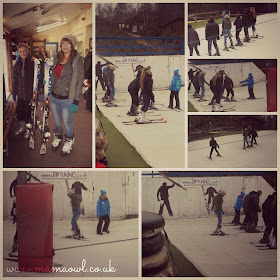 A of course did a bit of showing off having had more practice than the others taking part in the session, and J bless his heart did his best but spent quite a lot of time falling over (same as I would have!).

They both really enjoyed it (and I know that A would love to go on the ski trip again) but it appears that J has been put right off going skiing in the mountains now, maybe he might change his mind in time for 2015... Or maybe he's his Mother's son & would prefer to watch the action from in front of a roaring fire with a mug of hot chocolate!