We were lucky enough to be invited along to the Teenage Mutant Ninja Turtles event at ZSL London Zoo on Tuesday. My very first blogger event!
I have been invited to other events previously but unfortunately have never managed to attend one until now, with it being half term and my boys being big fans of the TV show it was the perfect opportunity for us.

We left in good time but unfortunately the horrendous weather meant that the spray on the motorway was like driving through a car wash, it took us over an hour longer than it should have to get there. This meant that we arrived late and missed the guided tour of the Zoo, but we were able to go round in our own time after the event.

The children immediately took off to the tables that were set up with TMNT goodies galore and got stuck in playing with them. L & H have the Nickelodeon Teenage Mutant Ninja Turtles TV Show on series link and watch it regularly, L is quite knowledgeable on the subject of TMNT and was in his element chatting to the event organisers about the characters and show. 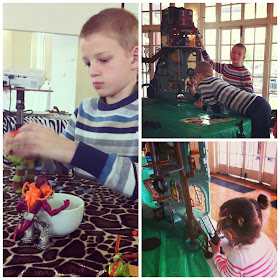 Their favourite playset by far was the (rather large!) Turtles Secret Sewer Lair, E had to stand on a chair next to the table in order to reach it but thoroughly enjoyed exploring all of the different levels and secret hidey-holes while the boys preferred sending the turtles off on the zip lines across the table top!

The kids had fun trying out the assorted Turtle action figures and all quickly found their own favourite character. L's favourite is bad guy Fishface, H likes Michelangelo and E chose Donatello as her own personal favourite. 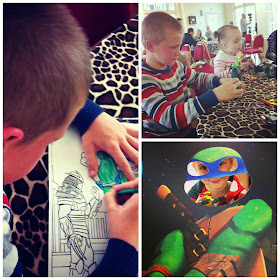 They spent a good couple of hours playing, and taking part in a colouring competition as well as having their pictures taken behind the cardboard cut-outs. We enjoyed a lovely lunch together as part of the day however the kids were far too busy playing to eat very much! L really enjoyed the presentation and seeing peeks and clips of the TMNT series and the people behind the voices of the characters.

When it was time to go, we were gifted with a bag of fab TMNT goodies including the character of Shredder and a Rippin Rider vehicle amongst other things, and the children were also allowed to take an action figure of their choice from the selection that they had been playing with - which made for a nice quiet journey home as they were too busy playing for anything else! 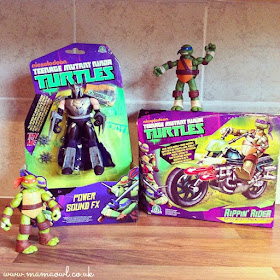 After the event we enjoyed a stroll around ZSL London Zoo visiting all of the animals. The weather being as awful as it was meant that lots of the animals were (sensibly) hiding away but we had a lovely afternoon walking around taking it all in & visiting the ones that we could see, and we all (even me) even got to stroke a corn snake that was brought out to see everyone. As you can see, the boys were dubious at first but after a little coaxing they were convinced to have a go. It wasn't as scary as they thought! Steve Backshall would be proud! 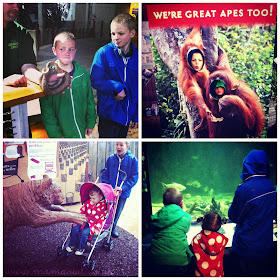 We're certainly glad we took our raincoats and some spare clothes, they came in handy when we got back to the car so the kids weren't sitting in wet clothes. The drive home was equally as awful as the drive there thanks to the torrential rain but it didn't spoil our day one bit. We had a really lovely time and thoroughly enjoyed every minute.

... Well, apart from the several minutes that the Mister & I were bickering about my appalling navigation out of Central London - but I think probably the less said about that, the better...
Unknown at 16:34
Share