I considered all of my options for Father's Day celebrations for the Mister this year, and decided that the best way to mark the occasion was to take the big kid to Thorpe Park (along with the five smaller children I also have...).

I stalked the weather forecast all week, having also carefully surveilled it the week before - 'Chance of afternoon showers'... Best we were going to get during the great British summer I thought, so we ran with it. As it turned out, it was a bit overcast and we had some drizzly showers for a very short time, but then the sun came out and it ended up being a glorious day! Win!

The journey there was uneventful (aside from one side-of-the-road emergency toilet break and E vomiting - note, always take a plastic bag in the car with you... trust me) and it took just a couple of hours to get there. It was well sign-posted from the motorway which was handy because I couldn't find my way out of a paper bag, just ask my husband!

On arrival, we parked up and collected our tickets before making our way into the park. The two staff members on the turnstiles were not particularly welcoming as the first faces you see on entering the gates as they were busy talking amongst themselves. A walkie-talkie was absent-mindedly waved towards one gate, indicating that that was where my husband should walk through with the pushchair while I took the older children through the turnstiles. No smile, no welcome, they simply continued on with their conversation after we 'interrupted' them.

I was surprised that the park seemed quite quiet, but this of course was a bonus for us because that meant shorter queue times. The longest queue I saw had a 45 minute wait, which I didn't think was too bad, though you can purchase fastrack passes if you'd like to avoid the queues on busier days.
A few of the rides were out of service, including SAW which the Mister & J were disappointed about, and Logger's Leap which L had been excited to ride while Detonator unfortunately was closed down while the Mister & kids were in the queue, but these things happen and safety is of course paramount so if they need to close then so be it, there's nothing you can do about that.

Our first stop with the kids after a two hour car ride was of course, the loos. While I didn't visit the gents (obv), I can report that the ladies facilities were clean and tidy, and I particularly liked the foot pedal operated taps as I am a bit public toilet-phobic in all honesty, so not having to touch taps & doors worked for me. It also made it easier when I was holding E up to wash her hands, too. I have been assured by the Mister that the mens were in equally as good condition as the ladies. 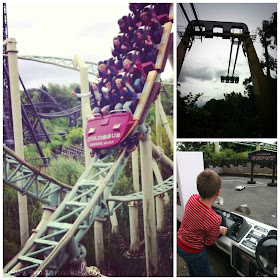 We wandered out in to the park and our first stop was Colossus, I waited with L, H & E while the Mister, A and J went on the ride. While we were waiting I bought the little ones some snacks from a kiosk and we watched some of the other rides, looked at the map and decided where we wanted to go next. We met them off the ride (which they thoroughly enjoyed) and made our way back along to Rush. While the Mister, A & J were queuing, I visited the kiosk just in front of Rush to get some change for the RC cars and was served by a really lovely young man called Abil who was exceptionally polite and helpful, who asked if we were enjoying our day & offered directions to a ride that L mentioned while I was being served. Excellent customer service, he is a real credit to the park.

As for the RC cars, trucks and boats that were dotted around the park, I think those were H's favourite things! At £1 a go for only a minute or so of use they weren't cheap to go on, but he loved them & kept asking to go back between rides, they were a handy distraction when we were waiting for the others who were on rides that H was just a little too short to go on.

E was able to ride the Rocky Express (three times) and the Flying Fish (twice) during our visit. When the gate was opened by an older child who at the front of the queue of the Rocky Express & all the kids piled through and on to the ride, the young man operating the ride was vigilant in making sure that all of the kids returned back to the queue and were height checked before he would allow them on again. Twice this happened while I was standing there when he was busy, by children who were not being supervised by their parents in the queue (which I thought was dangerous above all else, and the catch could only have been reached by an older child leaning over the gate to unlock it) but the lad did a good job managing the situation, I thought. 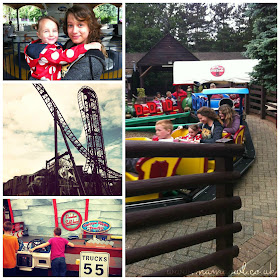 E really enjoyed the rides she was able to go on, but unfortunately was too small to go on the teacups which she was a little disappointed about but we distracted her with other things and she soon forgot about it.

There were lots of places to have lunch around the Amity Boardwalk area (and I really enjoyed the 1950s music being played here!), we chose a burger restaurant as it was the closest and I knew everyone would like something on the menu. I did notice that the prices were a little higher than they are at the same chain 'on the highstreet' however it's the same at all theme parks and attractions I have visited & we were prepared for that.
The restaurant was clean & tidy and there was someone sweeping up and clearing tables constantly while we were there. The service was quick and the food was as expected, the kids enjoyed their meals & soon we were back off out into the park for more fun. 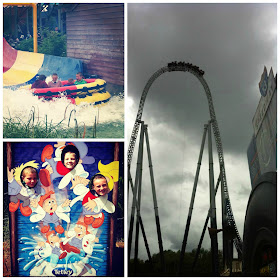 The Mister braved Stealth immediately after eating lunch, I had suspected it was all going to end in tears. Or vomit. However he surprised me with his cast iron stomach, and indeed went on it again with A & J since he enjoyed it so much! They also went on Storm Surge (this was L's favourite), the Slammer, Samurai and The Swarm which had some very impressive 'props' strewn around underneath the ride including an ambulance, helicopter & fire engine which H loved. The Swarm was A's favourite ride, I think she would have spent the entire day going round on this if she could have! 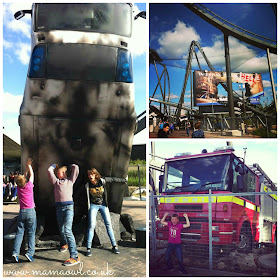 As the day ended we wandered to the other side of the park and E & I watched some water-skiing on the lake while the Mister & kids went on Quantum and Zodiac. 6pm arrived and we unfortunately hadn't managed to get round all of the rides but had really enjoyed the ones that we did go on. We definitely want to visit again to go on the rides that we missed out. 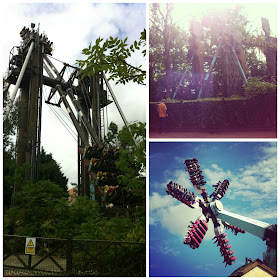 Overall, we had a really great family day and the Mister and kids had lots of fun together on the rides. The park is clean and well maintained, on several occasions I noticed litter pickers walking around clearing any stray rubbish, and there were several security guards patrolling the park too. It felt like a safe environment, and we all had a good time which is what you want from a day out. I would definitely visit again (and plan to!) and I would certainly recommend it to others, it was a wonderful Father's Day family outing.

We received complimentary tickets for Thorpe Park for review purposes. The views shared are my own personal & honest opinions and are written in my own words.
mamaowl at 13:42
Share