Keeping children safe is paramount in any parent's mind, and when you're out and about this Summer you might be concerned about the possibility of being separated from your little one in a busy & unfamiliar place, or them wandering off - hey, it happens, sometimes the lure of the ice cream kiosk is just too much (L has done that to me on two separate occasions).

If you're off to a festival, the beach, a theme park... You might be interested to hear about the genius idea that is the Kattoo. It's a temporary phone number tattoo for kids, easily applied and lasts for 2-5 days. It's also a UV blocker so you don't need to apply sun cream over the top (although we did, with no negative effects to the tattoo), and you can even wash it gently (without scrubbing) if your little darling gets it a bit grubby while on an adventure - as kids often do! - to keep it looking its best.

We received some Kattoos & the Kattoo pen in our BritMums Live goody bags, and the lovely people at Kattoo kindly sent us some more to use through the Summer on our days out. They even sent them in pink, green and blue - the favourite colours of E, H & L! I much prefer this idea to a wristband, which can be removed or fall off, and also would not be tolerated by L (who has autism). 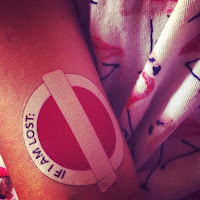 E had the first outing of the Summer with a visit to ThomasLand at Drayton Manor with her Auntie, Uncle & cousin C for C's 3rd birthday in mid-July. We applied the Kattoo to the inside of her wrist and I wrote my sister-in-law's phone number on it, just in case.

You apply the Kattoo as you would any temporary tattoo - simply apply on to clean, dry skin and hold with a wet cloth for approx 30 seconds, then peel off the paper and allow to dry before writing your phone number on to the white strip with the Kattoo pen, which has been developed to use with the Kattoos & is also safe to write directly on to skin. 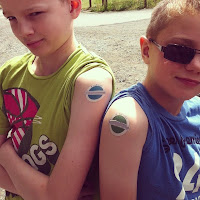 We also used them on our recent holiday to Torquay, they were great as extra peace of mind on our days out to Woodlands Family Theme Park and Paignton Zoo. We popped them on the upper arms of L & H so that they were concealed under their t-shirts but easily accessible should they be needed. They lasted well even through numerous showers and use of the swimming pool, and washed off in the bath with just a bit of elbow grease when we got home.

We received complimentary samples of Kattoo for review purposes. The views shared are my own personal & honest opinions and written in my own words.
Unknown at 08:00
Share