Sleep tight, Sparky - Coping with the death of a child's pet 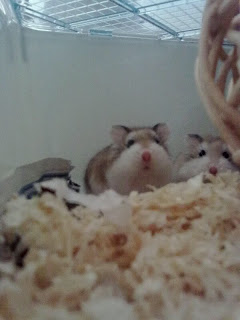 Last week, L turned 10 years old. We had cake and celebrated, and he remembered that on his 8th birthday he got his first pets, his very own Roborovski hamsters that he chose himself from the pet shop and that it was like it was their birthday too.

Early on Thursday morning, I was shaken awake by a frantic L telling me that Sparky was laying down and he couldn't wake him up. L's eyes were ringed red & full of tears, I could see that he was desperate for me to come and fix it.

It was a moment I had dreaded. Hamsters of course don't tend to live very long, and ours were already two years old. I knew it would happen one day and that it was going to be a hard lesson to learn. Even harder still knowing that with his additional needs, L - who has difficulty understanding relationships and emotions - thinks of his hamsters as his friends, when he doesn't have many human ones to speak of.

Sparky, the smaller of the two hamsters, looked like he was peacefully sleeping in the cage. I could see that he had died. My heart plummeted.

I turned to face L who was standing next to me, bouncing up & down on the balls of his feet and frantically rubbing the sides of his head ('stimming'), tears rolling down his cheeks. He was looking at me hopefully, and telling him that his friend had died was absolutely heartbreaking.

L was distraught. He spent the next three hours wandering around the house sobbing his heart out. He came to me for a hug (which is me holding him, as he doesn't always reciprocate even if he initiates it) and just wept.
My heart broke for him, he is utterly devastated. He has been watching his remaining hamster, Cannonbolt, like a hawk as he's convinced himself that he is going to die now, too. I'm expecting this to go on for a little while until he starts to come to terms with it. 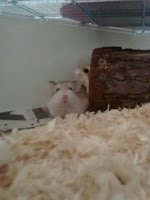 My mum came to see L after I called her to tell her what had happened, and she took Sparky away with her, wrapped up safely in his makeshift shoebox coffin to the lovely chaps at Charlie's Parlour pet crematorium. They have 'sent him to the angels' and have returned his ashes to us so that L can scatter them in the garden at home and say his goodbyes. We're going to get him a little plaque or engraved stone to place out there, for L to remember him.

I've been straight with L about death, he knows that death is a part of life and that this is just the way things are. That it hurts and makes us sad, but that it gets easier to live with the pain as time goes on. He knows that it is okay to cry, and to wish that they were still here, but that they can't come back.
I have held him while he cried and let him grieve for his lost friend. I know that soon he will accept it and it won't be so painful, but it is a very real pain even if Sparky was 'just a hamster' to some. He was L's friend, and he will miss him.