I have been keen to get the kids involved in activities outside of school, something to broaden their horizons and to meet new people and learn new things. This I feel is especially important for L, to help him socialise and hopefully make new friends.

J is on a local football team, which is co-managed by the Mister, and it has been good fun for him as well as a nice bonding experience for him & his dad. Granted, it doesn't always end well and sometimes J has wound up the Mister as both his dad AND his coach in one afternoon - no mean feat. But mostly, it's good fun and we enjoyed an evening out together for the football club's presentation night as the Mister is the goalkeeper for the senior team. He's knocking on a bit now bless him but as a goalie he has a few years left in him... So he keeps telling me anyway...

L & H both attend swimming lessons once a week. H is on stage 4 and is in a group lesson with eight other children, and L has 1:2:1 lessons with an instructor and is on stage 5. They are making amazing progress, especially L considering when we first started he didn't even want to get his face wet. Now he flings himself off of the edge of the pool with wild abandon, and they have both grown massively in confidence. 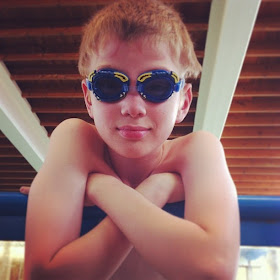 I'm hoping that a space will become available for E for swimming lessons after the Summer holidays so that she will be able to get started on learning to swim. And as for A, she has been taking guitar lessons at school since the beginning of the year, and has shown rather impressive musical ability considering her late start at it.

I do think it's important to encourage them in to extra-curricular activities without pushing them in to it, just because I want them to like something doesn't mean that they will!
To my delight H has shown an interest in Rugby, so I of course have offered to take him to watch Bath so that I can ogle the players to help him learn the rules and see how it is done. I took him along to his very first training session for a local team's U8s recently and he LOVED it. He has eagerly gone back each week since, and will be signing up officially come September.
He's definitely built for Rugby, being head & shoulders above most other kids his age. I really think that this is right up his street and I look forward to seeing him getting involved, making new friends & being active, I'm really pleased he's found something he loves. 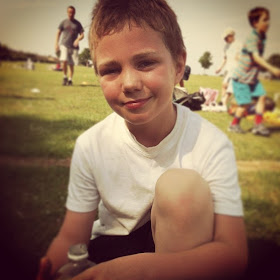 I have contacted a local archery club that I am planning on taking L along to after his birthday (as members must be aged 10 or above) to see what he thinks. I'm keen to find something he can enjoy that doesn't revolve around gaming, which is his absolute favourite thing in the world. That's fine, after all he wants to be a computer game programmer "when he grows up" so he tells me, but I would really like to get him out and meeting people too. His hip & leg difficulties mean he finds running around a bit challenging and sometimes painful so after a suggestion on twitter, I think archery is a good place to start for him.

What activities are your children involved in or do you hope to involve them in when they are older? Are you involved in any sports or activities?