I'll admit I am a reluctant touchline mum. Not because I don't love being there to cheer the kids on and support them in their sporting activities -

But because I bloody hate the cold.

I don't mind the rain, but when it's coupled with a wind that stops just short of gale force and a cold that chills you to your bones and takes you days to regain feeling in your extremities then yes, I am a massive wimp and would rather be at home in the warm, thankyouverymuch.

It's time to woman-up. I am going to go to as many matches as I able to, not just to watch the kids take part in their sports but the old man as well.
I've said it here now as well as in my Autumn Bucket List, you all have to hold me to it. I'll buy some extra layers. I'll get some welly socks. I will stay warm, and I will be there pretending I have a clue what is going on, and clapping when the other parents do. I might even try and learn the rules & laws. Soon enough they will be grown and off doing their own things, so I am going to grab every opportunity to be there for them while they still want me to be!

Last Sunday H had his first ever match for his U8s rugby team. He was so nervous in the morning but excited with it, and we got there early as advised by the coach because it was going to be a busy day for the club with lots of other matches going on at their new ground. The Mister got roped in to helping out with warm up (which I think is payback for him volunteering me for kitchen duty at training last week) and I was chatting to the other parents while we waited for everything to start. Our next door neighbours even came along to watch which H was really pleased about, too. 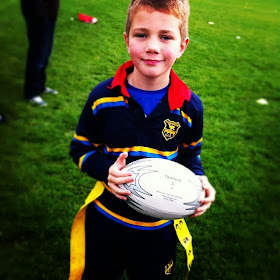 I'm delighted to say that he had a great first outing for his team and they won 2 of their 3 matches and drew the other, H even scored 5 tries. I was very proud indeed, the whole team did brilliantly. This is their last year of tag rugby and I know H is keen to be able to tackle (groan, such a boy) but this stage is so important for him to teach him the laws and let him get a feel for it. I know he is enjoying it and that is the main thing! 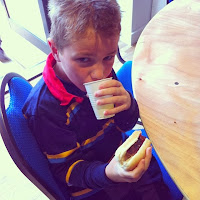 After the matches we had a quick look inside the new clubhouse and H had his post-match squash & hot dog, he likes his food and I think this was one of his favourite parts of the day!
I thought he would want to come home, have a bath & get straight into his jimjams but he was keen to get changed and go out with the Mister & J to watch J's football match in the afternoon so off they all went after lunch.

The good day continued with J's U13s team winning their match 5-1 so it was celebrations all round and I had some very happy boys indeed (the Mister included).

I've managed to find a taekwondo class for L to have a go at, so hopefully soon he will have his own activity to take part in as I know he has been feeling left out. The teacher has experience with children with special needs too which is of course very important and the first month's training is free, so fingers crossed he will enjoy it and want to take it up properly after his initial introduction, I think it'd do wonders for his legs too. We will see!


I have linked this post with #CountryKids at Coombe Mill
& #MagicMoments at The Oliver's Madhouse.
Unknown at 07:30
Share