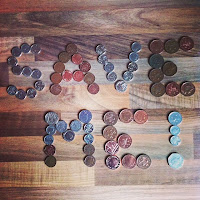 J has reached the age where he wants control of his own money and his independence from us. He'll be turning 13 in February, and earns his pocket money doing chores (all of the children do, the bank of mum & dad in this house insists upon work before payment) & then the money normally rattles around in his pockets or the bottom of his school bag. I think it's probably time he had somewhere a little safer to keep his hard-earned cash.

The Mister & I have discussed J having his own bank account so that he can be responsible for maintaining it himself & learning good money habits now while he's young. The same reason that his Dad & I have instilled that they must work for their money - we don't mind treating the kids now & again but we're not an endless ATM. I've had a look into offers for current accounts and I am keen to find one that offers online banking (so that I can help him keep an eye on his spending & saving practices) and his own debit card.

J having his own card would be particularly handy in that if ever he is stranded somewhere without any money I can quickly & easily transfer money into his account to enable him to get home/buy food, whatever his 'emergency' might be. We have done on this a couple of times for A, like on one occasion that she attended a gig and lost the cash that she had on her, meaning that she had no money for food - a quick online transaction and that particular crisis was swiftly averted.

The kids know that we'll always help them out where we can in times of need. I'm anticipating those phone calls from uni asking for a food parcel or help paying for this or that, and that's fine. But they also know that they must learn to take care of themselves and personally I think that having and managing their own current account for their pocket money is a good first step towards independence.
Unknown at 13:16
Share