Well this week was not exactly the balmy affair that the weatherman had promised (well - balmy in comparison to the recent downpours, that is) and so I had been putting E off the park after telling her I would take her, because frankly it was foggy and downright cold & I really didn't fancy it! 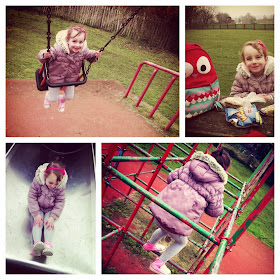 Wednesday rolled around and I could fob her off no more. Despite the fact that her little cheeks were rosy just from the short walk from preschool to the park due to the bite in the fog-heavy air, I had packed a picnic and we were on our way to the park - cold or no cold! 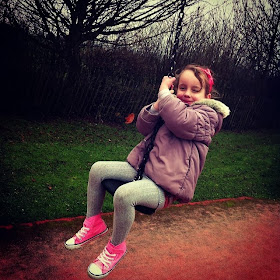 E took off running as fast as her little legs would carry her as soon as we reached the park. The swings are her absolute favourite thing and she made a beeline for them the second she was through the gate. I headed over to dutifully give her a push but she loudly informed me that A had shown her how to swing on Sunday, and she demonstrated how to swing her legs back and forth to gain momentum & propel herself without needing any help from Mummy. I was very impressed indeed! Such a big milestone for a nearly-four-year-old, she loves to do things for herself and be independent. Growing up far too quickly for my liking! 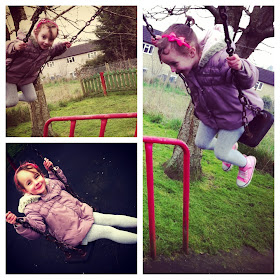 However - she did soon get bored of that and I was reinstated for pushing duties, and indeed ordered to push her "really really high!" and try and to get a photo of this, too, so that we could show Daddy later. Easier said than done, but we managed a couple.

She was squealing with unadulterated glee at every push, probably the only time my teeth weren't chattering was when I was laughing along with her at her enjoyment of the swings. There is nothing quite so warming to the heart as the laughter of your children - which is especially useful when it is brass monkeys outside! 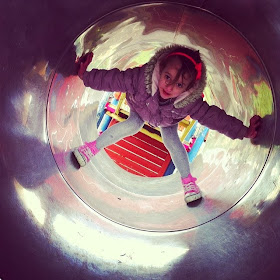 We enjoyed a simple packed lunch of E's favourite things (including her Nutella sandwiches with the "crust-is" cut off) but it was too chilly to sit down for too long, so we were up and back on the equipment again as quick as we could. Climbing through tunnels, flying down slides, zipping along on the flying fox, it was lots of fun & we had a really good time in spite of the cold.

The only shame is that the park is looking quite run down these days, everything could do with a lick of paint & there are one or two pieces of equipment that could do with some fixing up. It's a lovely little park and I think with some TLC it would be even better. Regardless, we'll definitely be visiting it lots throughout the Spring & Summer and we are looking forward to spending lots more time outside now that the warmer weather is on its way (or at least hopefully will be soon!), we may even look into getting E her own swingset for the garden since she enjoys it so much.