We celebrated E's 4th birthday over the weekend, and a very lovely weekend it was. I think we're all well aware of my dislike of (hosting) children's parties and I'm not planning on throwing her a "proper" party with friends until she is at primary school, so this was my last year of sidestepping that particular landmine. 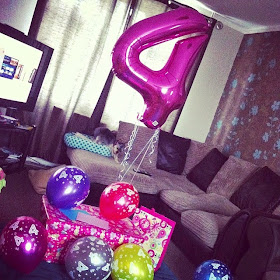 Instead, I booked tickets for myself & the Mister to take E & H to go and see Disney On Ice: Worlds of Fantasy at the Motorpoint Arena in Cardiff on Saturday evening, the day before her birthday.
This was the plan, up until 8am on Saturday when H decided he was vehemently opposed to going. He was already going off to my nephew S's birthday party during the day and he wanted to stay & play at my sister's afterwards, so I asked E who she'd like to take instead & she chose my niece, N. Luckily, they didn't have any plans so we picked up N mid-afternoon & set off to spend the evening enjoying the magical world of Disney! 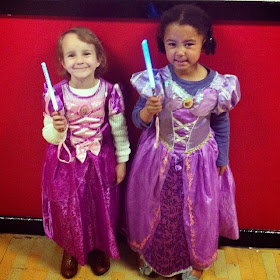 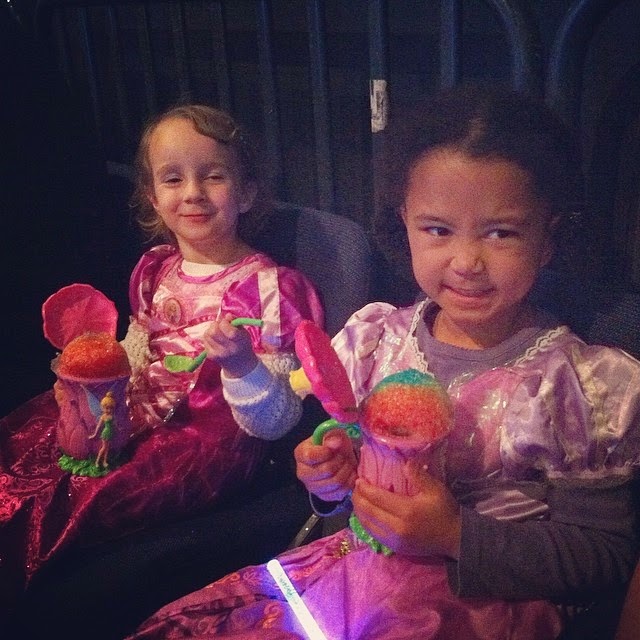 Both the girls dressed up in their Disney Princess outfits, so we had two Rapunzels with us! It was very cute, they were so excited and on the way in we bought them a light stick each, and then E insisted on her & N having Tinkerbell slushies, so... flavoured ice in a plastic cup, which cost £9 each. I'm all in favour of souvenirs and keepsakes but there really is no need for them to cost that much, it's ridiculous. I think £5 would have been more than reasonable and I'd have been far more willing to buy other things if they had been more sensibly priced. The family ticket cost £95 for the four of us and I think it was absolutely worth the money as it was a fantastic show, but the overpriced souvenirs really let it down.

We really enjoyed the show, it was brilliant and the girls were enthralled throughout. It really was a magical experience and I'm glad we opted for a "day out" rather than a party, it was perfect for celebrating her special day. 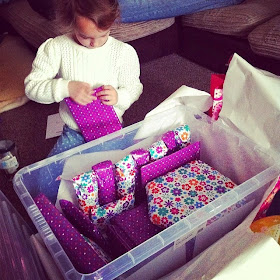 On Sunday she enjoyed a nice lie-in as we'd had a late night at Disney, and when she woke up she bounded down the stairs to see what was waiting for her. I had tried to be clever by wrapping up all of her presents and then putting them in a box and wrapping that up - however, she was not impressed by this and did not appreciate me "tricking" her... So I know not to do that again! 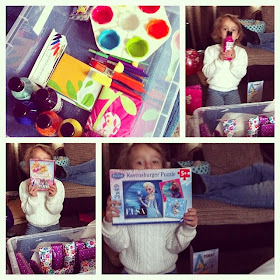 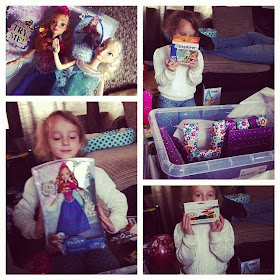 She was delighted with her presents, which included lots of art and craft items as she will sit for ages and paint and draw, frankly she has enough toys so the main bulk of her presents were art supplies which she was more than happy with. She couldn't wait to use it all and I already have lots of lovely paintings hanging up to dry out in my utility room!

She - like every other child in the country - is a huge fan of Disney's Frozen and had asked for a Frozen themed birthday cake, and so that is what she got. I didn't have a design in mind, I just bought some Elsa, Anna and Olaf figurines (I don't have the patience or skill to sit and make them out of fondant) and decided to wing it. I made a vanilla blue & white swirled cake, filled & iced with purple buttercream and covered it in teal fondant. I dyed white fondant to make it the colour I wanted using blue gel paste, and also added edible glitter to it as I was rolling it to make it sparkle (which unfortunately you can't really tell by the photos, but it did look effective). 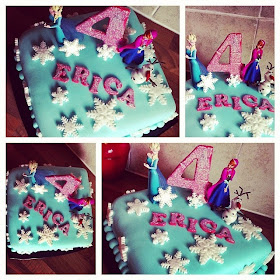 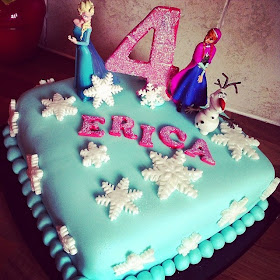 E was happy with it and that was the main thing, the blue and white swirls worked out well which was a relief as that was the first time I've tried that particular technique. Pinterest tends to give me ideas above my station when it comes to baking, so I was rather pleased that I managed to pull that one off. 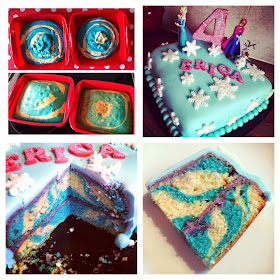 We had a lovely family day at home, and my sister L and brother M came by to visit with their other halves to drop off gifts and cards and wish E a happy birthday. We had a family roast expertly cooked by the Mister, and then finished off the day by watching Frozen on DVD. It was a really lovely birthday and she says she had a great weekend. Thank you to everyone who made it that way! 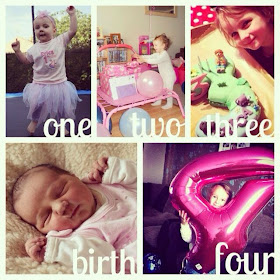