H took part in his last rugby festival before the season's end at the weekend, the weather forecast was full of rain but we held out hope that it would be light showers at the most.

Unfortunately - the boys endured rain, of what can only be described as biblical proportions. It hammered it down, to the point where just after lunch they ended the festival a couple of hours early. Luckily for me it was E's 4th birthday that day, so while I was at home in the warm and dry, painting & crafting with E, the Mister and H were outside, freezing & soaking wet....


However, the U8s are made of strong stuff and a bit of rain wasn't going to hold them back. H's team managed to finish as runners-up at the festival and won their very first trophy for the club! H was thrilled, he absolutely loves rugby and is so keen to start playing contact next season. Not once throughout the entire season did he complain about getting up on a Sunday to go and play, he was always up at the crack of dawn getting his kit on and having his breakfast so he would be ready.

On the occasions where we were unable to take him ourselves, either because of work or the Mister's U13s football commitments, he begged us to find someone who would be able to, so our next door neighbour (a big rugby fan) took him for us once, and a couple of other times the coach (who also has a son on the team) took him. The U8s coaching team are brilliant, I know how much time and effort goes into coaching kids sports teams as the Mister has been doing it with J's football team for years and I really appreciate them giving up their time (and sanity...) to keep the kids motivated and help them learn to play the game and be the best players that they can be. The team are a lovely group of boys & I am looking forward to watching them progress.

After his swimming lesson last week, L came home proudly clutching his Stage 6 certificate! After earning his 500m distance achievement just before Easter, moving on to Stage 7 as well has really boosted his confidence and it's good to see him working so hard to make progress. It's great exercise and physiotherapy for his legs and I am so proud of how far he has come since his first lesson two years ago. Physical activity can be very difficult for him and so swimming was the perfect choice to help him keep fit, active and healthy. Between that and his Tae Kwon-Do, I think we have nailed it! 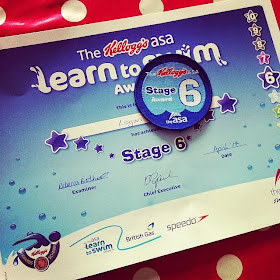