Every year the local Lions Club has their May Bank Holiday Fun Day down in the centre of town, and every year I try and avoid going - usually because it's raining, but mostly because there are just so many people I lose all patience with everyone and everything. The problem with having older children is that they can read, so the signs and posters that have been put up around town have not gone unnoticed by H who was, of course, really keen on going.

I did invite A, J & L to come with us but was met with a series of grunts of disapproval, so I left the 3 of them at home and took H & E down there "for an hour"... Remembering to withdraw some money on the way past the bank so that the kids could rinse me for every penny when we got there.

In all honesty it wasn't that bad, it didn't start to get really busy until we were ready to leave, for which I was very thankful. H & E got to have a few rides and turns on the activities and we stopped off and enjoyed ice creams and drinks on the grass in front of the Tithe Barn on our way home, which was probably my favourite part of the day. As much as the kids enjoy these events I can't help but balk at the prices of the rides. When we went to the Rugby Club Fun Day a couple of weeks ago the inflatables were all free for the kids to go on, so I was a bit miffed at how expensive some of them were particularly for the very limited time that the kids actually get on them. For example, the circus bungee was £4 for 5 minutes, I think £2 or even £2.50 would have been more than reasonable, & it was £3 to shoot a couple of arrows. I managed to spend £30 on 2 kids in the hour & a half we were there, I was actually quite relieved that the other 3 decided not to come otherwise I'd have had to sell some limbs to fund it all. I don't mind paying, but it wouldn't hurt for them to be reasonably priced.

All of that aside, the little two had a lot of fun and really enjoyed themselves, and I got to spend some good quality time with them. H liked shooting the arrows although he didn't win a prize (quelle surprise), E went on the carousel & then the two of them had a ride on the teacups together (H is such a good big brother), as well as the boats and the 'fantasy run' inflatable slide. 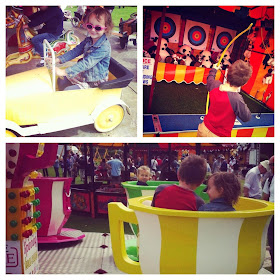 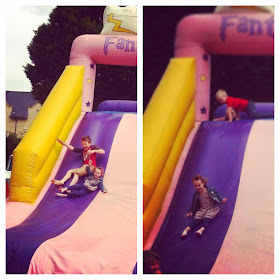 H had two rides on the mechanical bull and managed to hang on for a good while before he was eventually launched off into the side. He had a go on the circus bungee (E didn't want to) and loudly exclaimed that the harness was squashing some of his 'vital parts' (and those were not the words he used...), much to the amusement of everyone within earshot. What is parenting without public humiliation, after all? 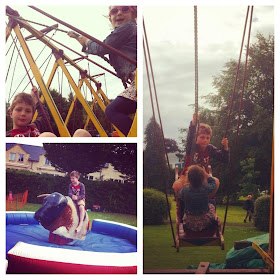