I do sometimes need to remind myself that L is a tween, and not a baby. I perhaps find myself sheltering him a lot more than I ever did J, or even H who is 2.5 years younger, because I know that he is more vulnerable.

It's a constant battle to stop myself from doing it quite so much as he gets older, as he needs to learn to manage himself as much as possible. I won't be around forever, and he needs to learn to get by as independently as he can. At this stage, we don't know what level that will be, but still. I need to rein the (s)mothering in a bit, to give him more room to grow by himself. 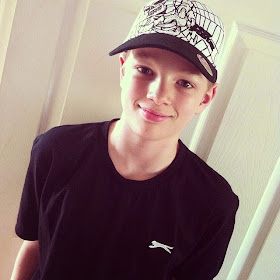 Last week, L went on his very first proper sleep away trip - the year six residential to Plas Pencelli. He has been away for a couple of nights locally on a school trip, but this one was 2hrs away for a full and busy week, with lots of activities, & completely out of his - and my - comfort zone. He was very excited about the prospect of going away on holiday with his schoolmates. I of course had reservations - would it be too overwhelming, would he end up overstimulated & anxious? How will he cope without his usual evening routine, without being able to eat his usual meals? Will he sleep?

His school are fantastic, I couldn't ask for a better and more capable staff to be with him. They know and understand him, they care about him, he is comfortable with them. But they aren't me, and not being able to be right there for him lost me quite a bit of sleep over the week. Every day when I collected H from school I stuck my head around the door of reception, I'm sure the admin ladies were sick of the sight of me by the end of the week! Every day the report was good, 'they're having a great time, everything is fine'. I did wonder if they would actually tell me if he had had a bad night or was upset & I think they probably wouldn't have to save me worrying. But it was nice to be reassured that everything was as it should be, that he was ok.

Monday arrived, and off he went. He had been begging me to pack his bag for about two weeks prior to the trip, I had managed to fob him off with the promise of a shopping trip to get some new clothes to take with him. The items on the kit list were not things he had a lot (or indeed any) of, so the Mister & I headed to a local sports shop and picked up some inexpensive joggers & hoodies for him to take. J went on this same trip when he was in year six, so I knew full well that they were going to be put through the ringer in caves & rivers and I didn't want him to ruin any of his other clothes!

He had an action packed week full of mountain walking, caving, kayaking... and a bit of swimming in the river, fully clothed. Of course. He was also able to stop & rest whenever he felt that he needed to, which was of course very important because he still suffers pain & discomfort in his hips and legs due to his persistent femoral retroversion, & tight hamstrings.

The week passed quite quickly, and I was eagerly awaiting his return at 4pm on Friday along with E & J, having dropped H off at a friend's house for the afternoon. The coach pulled up and the luggage was taken off, then the kids filed off the coach one by one. L came tearing across the car park and flung himself into my arms sobbing that he had missed me and was worried he would forget what I looked like! The headteacher said he'd had a good week though he thinks he was starting to struggle a bit by Thursday, and the deputy head told me it had been an "up and down" week, but with more ups than downs and that she was looking forward to showing me the photos... I'm quite intrigued to hear all about it after half term! 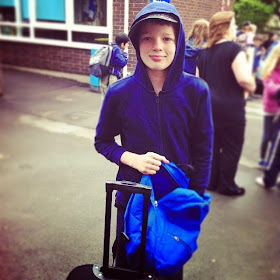 I unpacked his case and was nearly knocked out by the smell. His suitcase contained a delightful bin bag full of soaking wet, muddy, sandy clothes that smelled like something had died in them - much the same as what J had brought home when he went! It has all since been washed - twice - with some Oxi powder in with the detergent, though to be honest I did consider just taking the suitcase outside, lighting a match and throwing it in...

I've been through the case & can see that he's clearly not quite ready for me to trust him with his own personal care just yet, though he did remember to shower & put deodorant on. Even though he is nearly 11, he is not your average 11 year old and does still need me & his Dad to keep him focused & help him with a lot of things. With all of that said, he did a wonderful job on his first time away from us, and he was so proud of himself for managing the full five days away, and I am very proud of him, too. We all missed him terribly, and I am so glad to have him home with me where he belongs.

The past couple of weeks have been a big deal for him, with SATs the week before his trip, and then the residential. He had a wonderful school report and a great parent/teacher consultation, and we are so, so proud of his progress - especially when you bear in mind that when we moved him to that school, he was so traumatised that he would only sit under the table and hide from everyone. He has grown up so much, and come on in leaps and bounds.

Well done L, we knew you had it in you.