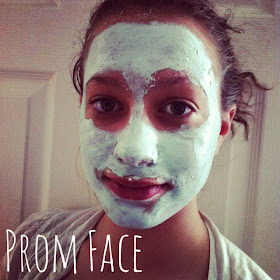 On Thursday 19th June, the students of A's school were all busy making their final preparations, and getting ready to celebrate the end of their secondary school studies (for those not staying on) with their classmates.
That morning, A headed into town to pick up the last remaining items she needed - some false eyelashes, and a clutch to tote around her money, prom ticket, and phone. She also got herself a face mask to get her skin ready for the make up it would be subjected to that evening!

At 3:30pm we headed to The Body Beautiful where A was booked in for the Prom Package, which included nails, make up, & hair styling for just £60.

We had already been in the previous evening for A to have her nails done, she chose a beautiful teal blue with sparkles to complement her dress.
The young lady did a wonderful job, and managed A's umm-ing & ahh-ing and indecision very well, before A finally settled on what she wanted. 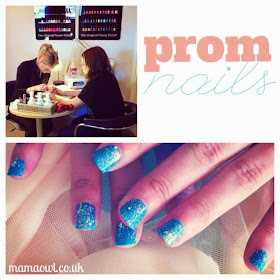 The day of the prom, we arrived with A's bag of tricks in hand ready for them to do their thing. A prepped her face by applying moisturiser, as well as washing and straightening her hair ready for styling - also not forgetting to wear a top that she could remove without pulling it over her head! 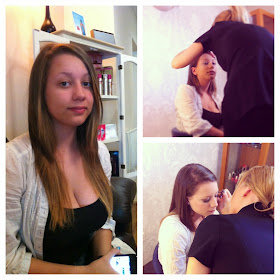 The same young lady that had done A's nails also applied A's prom make up. A showed her some pictures of styles that she liked and had saved on Pinterest, and she got to work. It took a while for A to get used to the false eyelashes, but the result was absolutely stunning - she did a really good job and A was delighted with it.

After the makeover it was time for hair styling, so we headed downstairs to the salon and the hairdresser worked her magic to recreate a style that A had shown her. A half-up-do with plaits and loose curls, and finally, embellished with my gorgeous Estiva Swarovski barrette from Stone Bridge Hair. 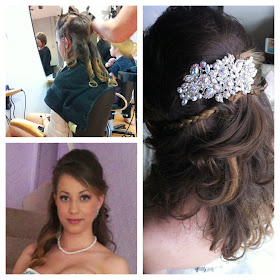 We left the salon just after 5pm which didn't give us much time to get to my in-laws house so she could change into her dress, before she had to meet her friends. We hopped into a taxi and got there in just a few minutes, dashing upstairs to get her changed.

I helped her into her absolutely stunning Alyce Paris Prom dress, which we bought online from NewYorkDress.com. The dress is beautiful, it really is a WOW dress with its sheer light blue overlay and jewel encrusted sweetheart neckline. We ordered it on a Saturday afternoon and it arrived less than a week later which I thought was fantastic. We had to pay a little extra to get it through customs, but that didn't delay it at all and the international shipping had been free.

New York Dress displayed outstanding customer service and I wouldn't hesitate to use them again or to recommend them to others. The Alyce Black Label dresses are exquisite, A had fallen in love with this dress and so this was the dress that she earned herself with all of her hard work, studying, and revision. We employed the services of talented local seamstress Alexandra to alter the dress to fit A perfectly, and she did a wonderful job - after seeing A only twice, the dress fit like a glove and looked amazing.

A looked and felt like a princess. And here she is.

She looked absolutely breathtaking, her father and I could not have been more proud. Her Grandfather D was there to wave her off when I took her to meet her friends, and was very emotional & proud when he saw his eldest granddaughter all dressed up. Her Grandmother J was unfortunately unable to be there as she was at work but she had earlier offered to lend A her pearl necklace to wear, and it looked perfect with her dress, she was delighted when I showed her the pictures afterwards.

We had very carefully chosen all of A's accessories to match her dress. Her beautiful earrings were bought from a company I found on Twitter called Treasured Treats, they looked like they had been made to match the dress and arrived very quickly after ordering. Her beige/pink pearl necklace was borrowed from her Grandmother as I said, and the Swarovski barrette was given to her by me.

We bought her pearl & crystal bracelet for just £3 from Primark and originally it was going to be used for her corsage that we would have ordered from The Floral Designer, but unfortunately we ran out of time. Her shoes were £10, also from Primark, and complemented her dress really well, and A then bought herself a white lace clutch from New Look to finish it all off. 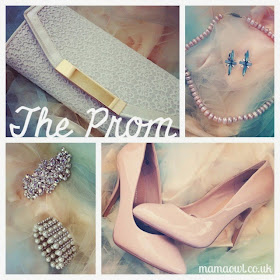 It really was a night to remember, with a slideshow presentation of photographs of all of the students from year 7 through to year 11. There was a very tongue-in-cheek awards ceremony by the teachers which was all in good fun, and then the kids kicked off their shoes and danced all evening. There were lots of inventive ways of arriving at the Prom including a truck, and fire engines, and the usual array of various sports cars, but A and her group of friends arrived in style in a cool vintage bus, arranged by the mums of A's friends, S & L. 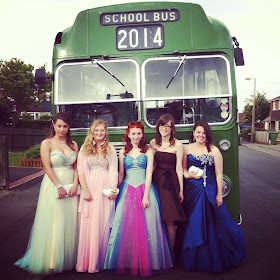 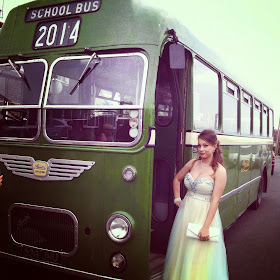 Before I knew it, A was home and exhausted with sore and blistered feet, but full of memories of a wonderful night and carrying her official school leavers hoodie under her arm. Standing on the road waving her off on the bus I realised that one day, in the not too distant future, we will be waving her off on adventures far beyond the golf and country club just outside town. She will be jetting off to find her way in the world, and while we will be sad to see her go and will miss her terribly - we will be so, so proud. 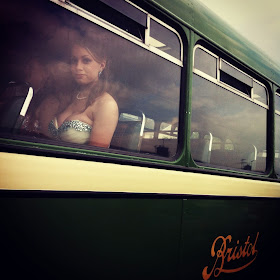