Friday movie night is a big thing in the Mama Owl household. There is nothing we love more than choosing a good family film, getting some snacks and all snuggling up together on the sofas & beanbag to watch. Even with such a wide age range, we always manage to find something to suit us all, and usually it's a Disney movie that wins out.

Having grown up with the Disney classic Peter Pan, I was delighted that Disney continued on with the stories in the new Tinker Bell & Disney Fairies films. My kids are also big fans (not sure that the boys would admit it though to be honest) and they couldn't wait to watch Disney's Tinker Bell & The Pirate Fairy when it was released last month. Zavvi sent us a copy to enjoy together on movie night, and the children absolutely loved it. 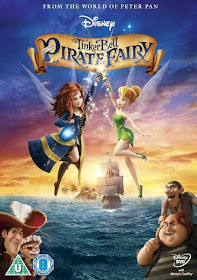 From the world of Peter Pan comes The Pirate Fairy, a swashbuckling new adventure about Zarina (voice of Christina Hendricks), a smart and ambitious dust-keeper fairy who's captivated by Blue Pixie Dust & its endless possibilities.

When Zarina's wild ideas get her into trouble, she flees Pixie Hollow and joins forces with the scheming pirates of Skull Rock, who make her captain of their ship.

Tinker Bell (voice of Mae Whitman) & her friends must embark on an epic adventure to find Zarina, and together they go sword-to-sword against the band of pirates led by a cabin boy named James (voice of Tom Hiddleston), who'll soon be known as Captain Hook himself.

Enjoy the laughter, heart, magic and thrills of The Pirate Fairy.

E: "I like the movie because it has pirates in it and a pirate fairy!".
L: "It's awesome! I liked how they made friends with the pirate fairy. The funniest parts were with Crocky the crocodile".
H: "It was really funny, and now we know where Captain Hook came from".

The Pirate Fairy is a lovely family film, suitable for all with lots of memorable funny moments and I am sure it will be enjoyed by your family as much as it was mine, I can see this becoming a family favourite.

It's not movie night without snacks & yummy goodies, and along with our usual popcorn and jelly sweets, IWOOT.com sent us a Shake n' Make Ice Cream Maker so we could make our own tasty ice cream. The description promises a delicious sweet treat in minutes... Did it deliver on that promise? 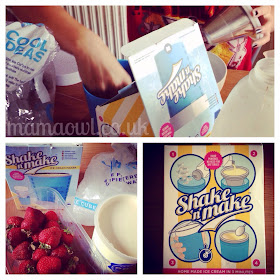 I have to admit I was sceptical at first. I'm wary of anything a bit gimmicky like that, and thought we'd end up with cold slush rather than ice cream... However, I was pleasantly surprised and indeed proved wrong. A was the chief ice cream maker, and following the step-by-step instructions we prepared our chosen ingredients, popped them inside the tub, and then gave it a good shake. It took more like 5 minutes than 3, but... 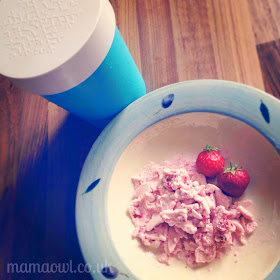 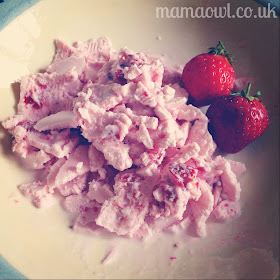 Tasty ice cream in minutes, exactly like it says on the box. We had to scrape it off the inside of the cone in the tub, but it was quick & delicious and I was impressed. We made strawberry ice cream first (which A had, of course), and then E helped make some banana ice cream for herself. I'm looking forward to making myself some clotted cream and honey flavour ice cream.

I love that you can choose your own flavours and ingredients and just make whatever you fancy, using ingredients that most people usually have in the fridge. A very clever bit of kit & lots of fun to use.


We received a complimentary DVD and Shake n' Make for the purpose of this review. The views shared are my own personal & honest opinions and written in my own words. All links are no-follow.
Unknown at 07:30
Share