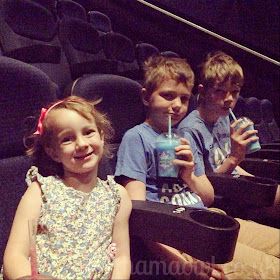 One of the things on our Summer Bucket List was to go to the cinema, & the Summertime is the perfect time to go with so many new releases in time for the holidays.

L, H & E decided that they wanted to go and see How to train your Dragon 2, so we stocked up on some treats (Haribo of course) & headed to the cinema.

We had 2 cinema tickets that E won as "junior of the week" in our local paper's birthday club, so as we'd saved money on admission, I treated them all to a Tango slushie each and got a bottle of water for myself since it was absolutely scorchio - I was so grateful for the air con inside the cinema.

The kids were delighted to finally see a full trailer for The Box Trolls (which looks like a really cute family movie), and Paddington Bear which they are so excited about watching, it looks very funny and I think it's being released just in time for us to go and watch at the cinema at Christmas/New Year. 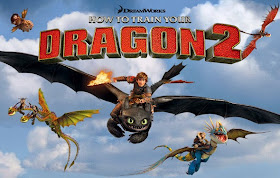 Now, we absolutely loved the first HTTYD movie - it is a firm family favourite, and we all still enjoy it now even four years after it was released. It's one of those movies that we can watch again and again, and never get bored of it. Sequels don't always do the first movie justice... So with that in mind, we had high hopes for HTTYD2 & honestly - we were not disappointed.

The second movie is set 5 years after the first, the dragons and vikings are living together harmoniously on the island of Berk. Hiccup & Toothless find an ice cave full of hundreds of wild dragons during their explorations of unmapped territories, and meet the mysterious Dragon Rider. They soon find themselves embroiled in a battle to keep the peace between men & dragons.

Featuring the voice talents of Jay Baruchel (Hiccup), America Ferrera (Astrid), Gerard Butler (*excuse me, I may have drooled a little bit*... as Stoick the Vast), Jonah Hill (Snotlout) & Kristen Wiig (Ruffnut), it's an action packed movie that is full of heart and humour... But take some tissues.

I have no doubt we'll be heading to the cinema again during the Summer holidays - we may even go to see HTTYD2 again!
mamaowl at 07:30
Share