A family holiday in France

In the second week of August, we packed up and headed off to the South of France on our first family holiday abroad all together. After an overnight stay and whistlestop city tour of Paris we piled back in the minibus and headed down to Montemboeuf in the southwestern Charente region of France, to stay at the beautiful Les Deux Pins.

Les Deux Pins is a gorgeous 5 bed, 3 bath holiday rental villa in a beautiful rural location, with its own swimming pool as well as a pool table, ping pong table, and large garden. It is owned by Gary & Deana who live on-site but are unobtrusive, and are a very lovely couple and wonderful hosts. 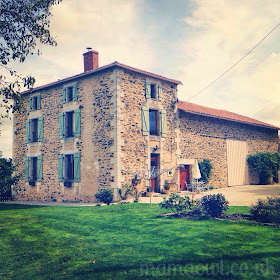 Surrounded by rolling countryside and stunning views, it is one of the most peaceful places I have ever visited. Our plan for the week was to stay at the villa and simply enjoy doing a lot of nothing, swimming, playing pool, reading, playing and just general hanging out doing as little as humanly possible, and that was exactly what we did. It was bliss. 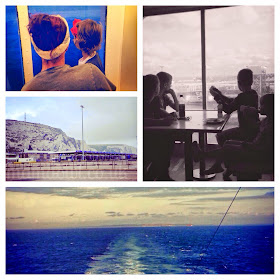 It was a long old trek down to Montemboeuf. We got the ferry from Dover to Calais and travelled down to Paris, stopping overnight and enjoying some sightseeing before carrying on the journey. Aside from some travel-induced vomit incidents (both on the way there & the journey back, 3/5 of my kids - 1 of them twice...) the children were all immaculately behaved and so patient considering the amount of travelling they endured. We got rinsed on the toll roads, it cost us around €100, but it meant a shorter journey, & no traffic.

The villa looked amazing in the pictures I had seen, but I was still awestruck by it when we saw it in person. It is basically my dream house, if I could have picked it up and brought it home I would have. The bedrooms are beautifully decorated and I loved the colour schemes in each room. As my niece C was on holiday with us she had a room to herself so she had her own space and privacy, the three boys shared a room, and E & A shared the adjoining room (via a Jack & Jill bathroom suite), all up on the second floor. On the first floor the Mister and I had our own room, and pretty much sole use of the enormous bathroom, and then our friend Leo (who had organised the villa and holiday) & his son O shared the other bedroom with en-suite. 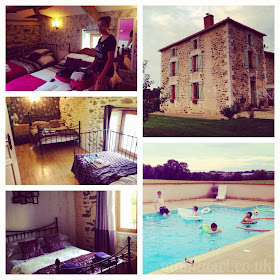 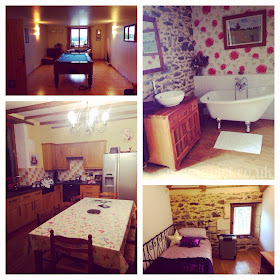 On the ground floor was the enormous kitchen with a table large enough to seat all 10 of us, a living room with TV & DVD player, another WC, a games room with pool table, and a utility room with washing machine. Outside, there is an outdoor dining area and barbecue, and a pool terrace where the swimming pool and ping pong table are located. The pool is fenced off and secure and the lock too high & tricky for a child to reach or undo by themselves. To be fair, I struggled with it on occasion!

The pool was so cold but lovely and clean and the kids spent the entire week in and out of it even though the weather wasn't the best. It rained almost every day but they were mostly showers and were over before they began. The kids made the most of having their own pool for the week and when they weren't eating or sleeping they were charging past in their swimming gear with their goggles on and dragging a towel behind them. We took a good selection of inflatables and pool toys and games with us but there was a big selection supplied too which saw some good use during our visit. 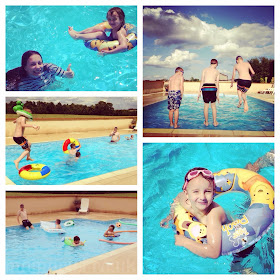 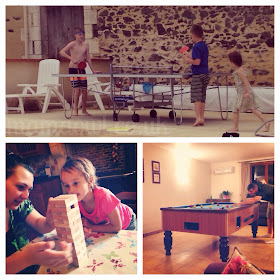 The garden area is huge and was great for the kids to run around on. We took a football, and tried to get a game of rounders and cricket going one night but it always descended into chaos and the kids running around screeching with laughter & chasing each other. It was rather lovely to watch.

We had considered going off to explore the local area but to be honest, the villa had everything we needed and it was nice to not have to do anything. The kids were perfectly content to roam and play, and aside from one or two tantrums they were brilliant all week. They got on, they played together nicely, they had fun. What more could you ask for? 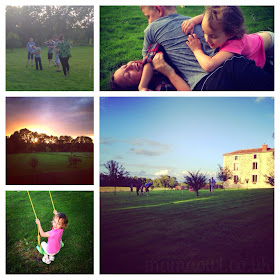 I managed to dodge the cooking all week and instead stuck to doing the washing, dishwasher & general wandering around behind children clearing up the trail of destruction behind them. Tidying their rooms, retrieving wet swimwear & towels from just about everywhere, etc. Aside from not cooking, it was much like being at home - but for some reason I really didn't mind! The Mister and Leo stocked up at the supermarket (which was about a 15 minute drive away) and both took charge of the food prep and cooking all week, and a grand job they did too. I think I must have eaten my weight in pain au chocolat and brioche as I had them for breakfast most days, and to be honest right now wouldn't mind if I didn't eat or even see one ever again!

On our last day we got up early and headed back to Calais to get our ferry home. In the end it took us 20 hours to get from Montemboeuf back to our house, & poor Leo had to do all the driving. We got home in the early hours of the 17th and sent all the kids off to bed, then the Mister & I got up early to clean the minibus before it went back to the hire company for 08:30.

It was our first holiday abroad all together since the days that we were just a family of four, and it was absolutely wonderful. I had such a great time, and enjoyed every single day of our time together in France. Apart from when we left the suitcase in Paris (it has since made its way back to England...). I'm eagerly looking up places to go next year and working out what we will be able to afford, as I'd love to take them abroad again now that they are older and we don't have to faff with cots & pushchairs and the like. It's doubly important to me to enjoy this time because soon enough A will be heading off to university and on adventures of her own, so we really only have two more years before we'll be travelling as a family of six instead of seven. I plan to make the most of every opportunity we have to get away and be together. 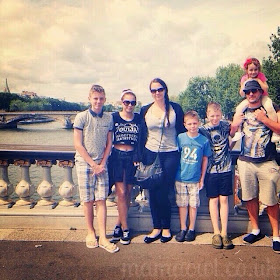