Apparently we've had a six week Summer break? I'm fairly certain it was only about three? At least that's what it felt like... I didn't have time to get sick of my kids because the holidays whizzed past at an outrageous speed and to be perfectly honest I feel a bit cheated. I'm not ready to send them back. I didn't finish doing all of the things that I wanted to do with them.

I'm not ready to let them go.

This week I have watched my middle son stride off into senior school with his big brother like he's been going there for years. The boy that sat under the table for weeks at his fabulous primary school, the ones who brought him back from the trauma he suffered at the hands of his previous primary. The boy who has caused more tears, grief and stress than the rest of my kids put together. The boy that has been worth every minute. That boy. He's growing up. He's becoming a young man. He has started year seven. 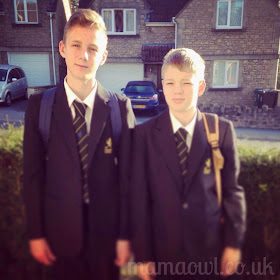 J has started year nine, and thankfully is (so far) delighted with the classes he is taking, after choosing his options last term. Fingers crossed for a settled year with lots of progress. I'm also really proud of how he has taken care of L, too. He has his moments like any other kid, but he's a good brother.

H is now in year four and I could tell from the way he was carrying himself around the playground, chatting to his buddies, that he feels more grown up. He looks more grown up. He's pleased to be in a class with his best friends, and that he is the big brother at school now. He tried to give E a hug and wish her luck before he joined his line before class, but she was having none of it. 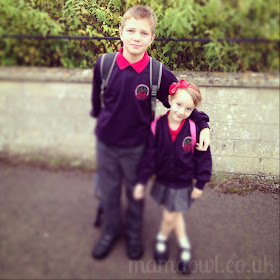 The school days have started for my baby. Though - she is of course not a baby any more, and she will tell you this quite vehemently should you ever happen to call her that within her earshot. She's a little person, with her own thoughts and feelings and ideas and opinions.  She goes to "big school". She is grown up, just like H. Unfortunately her first day was overwhelming for her, and her initial excitement gave way to some tears and uncontrollable sobbing which could only be remedied with her father and myself leaving to let her teacher calm and settle her. Her teacher (and a fellow mum-friend who was still in the class with her daughter) assured me that E settled quickly after we left. It broke my heart to leave her crying but sometimes you just have to rip the plaster off. She was fine. I was fine. She had a good day.

Today, after her GCSE success, A starts the sixth form. Her first day is actually just an afternoon, she'll have an induction meeting and her photo taken for ID cards and such, then they're having a welcome barbecue. She's nervous but looking forward to the next stage of her academic career, the next step before university and heading out into the big wide world by herself, to make her own memories and find her own adventures. 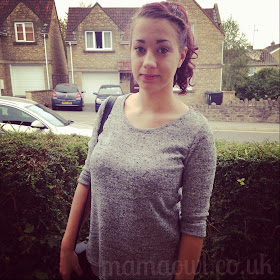 I'll be honest - it's me who is having the most trouble coming to terms with everything. I have spent days and nights worrying about what happens next - will they be okay? Have I prepared them enough? Will they manage without me?

I know that those aren't the questions I need to be asking myself. The question is - will I manage without them? I feel utterly unprepared for this. I feel lost. I have spent sixteen years mothering them, helping them grow, holding their hands, healing their "baddies"... And now they're growing up. 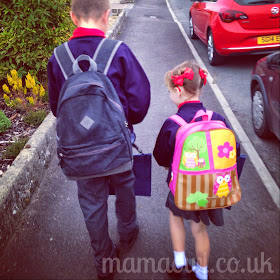