Paws for Thought for BEAR & WWF

We are big fans of BEAR, their no-added-nonsense preservative free range of food and snacks are lunch box and after-school staples in this house, especially their delicious pure fruit Paws, and recently BEAR teamed up with the WWF to work together to protect the paws of the world's most endangered species of bears.

Six of the eight bears of the world are threatened with extinction, and BEAR wanted to do something to help address this, so their 5th birthday seemed like a great time to do it. In a special partnership with WWF, they are working to protect these amazing bears and other wild species (and the habitats they rely on) with a donation from every pack sold of their BEAR pure fruit Paws snacks.

BEAR invited us to celebrate their birthday as well as raise awareness of their campaign by sending us a special surprise, the children were treated to tasty packs of fruit Paws and received their own little party bags with goodies inside, including fun birthday badges for them to make as well as a special map with lots of interesting bear facts and information. 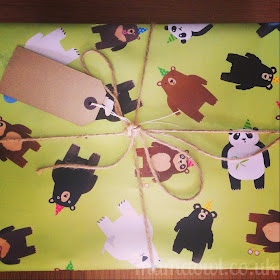 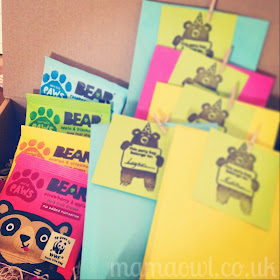 For every pack of special WWF Paws purchased until November, BEAR will be donating 5p (single packs) and 25p (multipacks) respectively to WWF to help protect the world’s most endangered paws and other species . On the front of the packs, four of the world’s threatened bears will be making a special appearance; look out for Spectacled, Polar, Sloth and Panda bears appearing on the packs from September to November. As well as raising donations for WWF, the campaign sets out to help engage and educate kids about the world’s amazing creatures with a special map and stickers that highlights where they live and what makes them unique.

BEAR’s founder, Hayley Gait Golding, says: “BEAR started because we wanted to help people get back to nature - both in terms of the food that they were eating, but also in getting them really excited about the world around them. Working with a partner as special as WWF is a real privilege. Together we want to help get young children really engaged with these magical animals - about where they live and what makes them unique- and for them to feel excited that they have made a difference.”

Nicky Day Director of Corporate Partnerships at WWF-UK says: “WWF is really excited to be partnering with BEAR, a company that shares our values in respecting the natural world.  Through working with BEAR we will be able to engage with families and children about our work safeguarding the world’s most iconic and threatened species whilst raising vital funds for our conservation work around the world.” 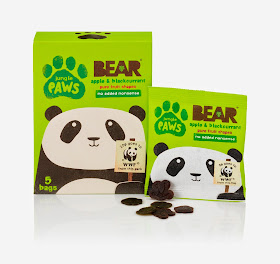 BEAR fruit Paws are pure fruit shapes that take kids for a walk on the wild side. Made from gently baked fruit picked in season, and never from concentrates, they contain no added sugar, preservatives or stabilisers. They are available in four tasty flavours- ‘Dino’ Paws (strawberry & apple), ‘Jungle’ Paws (apple & blackcurrant), ‘Arctic’ paws (raspberry & blueberry) and ‘Safari’ paws (orange and strawberry). Each pack contains five paw prints from animals that live in that habitat. 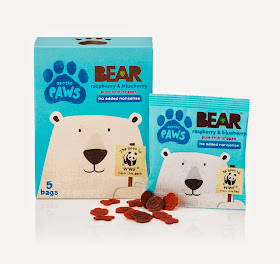 While the campaign will soon be coming to an end, the work doesn't stop there. WWF is one of the world's largest and most respected independent conservation organizations, with almost 5 million supporters and a global network active in over 100 countries. WWF's mission is to stop the degradation of the earth's natural environment and to build a future in which humans live in harmony with nature, by conserving the world's biological diversity, ensuring that the use of renewable natural resources is sustainable, and promoting the reduction of pollution and wasteful consumption. Please visit WWF-UK and find out what you can do to help.
mamaowl at 07:00
Share