On Saturday, after over a year of attending a weekly Tae Kwon-Do class, L finally passed his first junior grading & earned his very first belt - white with red stripe. Due to the nature of his difficulties, we've been concerned how he would cope in a grading environment which can be very busy with lots of spectators, as well as loud and overwhelming for someone with Autism.

His instructors have been preparing him and making sure that he knows what to expect, and after this - his first "in-house" grading - they are sure he is ready to progress to a grading along with the rest of his classmates. At the weekend, his instructor tested him and he earned his white belt with red stripe and was applauded by the group for his efforts.
He was so proud and pleased with himself, it was lovely to see, and for him to know that going every week and working hard has earned him a belt and certificate. He has had his confidence boosted and he is very keen (although a little anxious) to attend the next grading with the others in January.

It was important for us to find an activity for him that would suit him and that he would enjoy. With his hips & legs as they are, very physical sports like rugby, running, or football are simply not appropriate, so he has a weekly 1:2:1 swimming lesson with an instructor (though he is at stage 7 and will no longer need to go soon, we will probably continue the sessions because he enjoys them and it is good physiotherapy for his legs) and after careful consideration we decided to give Tae Kwon-Do a try, too.

From the very first session, he loved it. He was eager to join in and seems to get on well with a few of the other people in the class, particularly the older ones who are more understanding & mature. It has been brilliant for him in terms of the social aspect as well as the physical, & it has been just the thing for him as it is very routine and methodical which suits him & his needs.

We are so very proud of him & how hard he's worked, & to see how far he's come is wonderful. Sometimes things can be very difficult for him, but he really does try his best & that's all we can ask of him. He's an amazing young man & we're looking forward to watching his next grading in the new year. 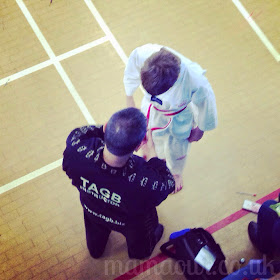 I am this week's #LoudnProud host, and we would love to hear all about your special moments and achievements, so please do share your posts below. Feel free to grab the badge and we would love it if you could visit others and share the linky love - thank you! The linky closes at Midnight on Sunday, and next week will be hosted over at NotMyYearOff.