It's the end of the rugby season, and so we look forward to a couple of months without early Sunday morning starts and chilly, muddy fields before they head back to summer training in July/August to prepare for the U10s 2015/16 season. H loves playing rugby and his team are a really great bunch of lads, they all get on so well - bar the occasional ding-dong over nothing as is the way with kids - and H has made some really good friends. They still have lots to learn but that's all part of the fun at this age, learning the rules and how to play the game, and finding their places within the team.

Unfortunately I had to miss his end of season presentation because it clashed with E's 5th birthday party, but the Mister took him along to collect his team trophy. He wore his prized Bath rugby shirt, and proudly picked up his award before leaving early to attend his sister's party. I'm disappointed that I didn't get to see him collect his trophy, but so proud of the effort he puts in, how hard he always tries, and his commitment to playing.

Along with his achievement in the swimming gala, he has shown what a great little sportsman he is and I'm looking forward to seeing where next season takes him, and last week he brought home a glowing school report saying how delightful, thoughtful and considerate he is as well as having a great sense of humour. He is growing up to be a wonderful young man - I honestly could just burst with pride. He is a star. 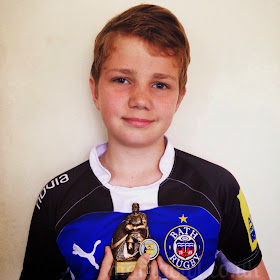 E was a part of her very first class assembly last month. She and her class showed us their daily routine at school, as well as singing a song with actions. E gets a little emotional and anxious during this sort of thing, and I was so proud of her for being brave and doing her part during the assembly - she showed us what they do in PE as well as a picture she had painted - and even doing all the actions to the song and singing along. At the end as I was getting ready to leave she had a few tears (as you can probably tell from the photo!), but she took a deep breath and went back off to her classroom. The whole class did a beautiful job and it was a really lovely assembly.

She's doing so well at school, aside from her initial anxiety first thing she has settled in and made lots of friends, as well as excellent progress - she's now been moved up to level 15 in reading. I'm looking forward to these last few weeks of her first year at school, including her first school sports day next month! Her very first school report was brilliant and she is trying so hard, gaining lots of confidence and making great strides in her learning. It is bittersweet to see my youngest growing up, but I love being there to watch and enjoy every minute of it, and realise that I am so lucky to be able to do so. 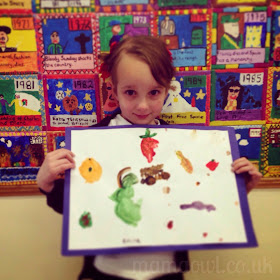