We have reached the end of the 2014/2015 school year and I have to say, I am relieved. This year was a difficult one for our family with a massive transition from primary to senior school for L which brought with it a whole host of new challenges (and stress), a brand new start at primary school in reception class for E, and the beginning of A-levels for A. To say that we are all exhausted would be somewhat of an understatement.

The first day of school back in September was filled with excitement and trepidation. New friends, routines, teachers... So much to learn and take in. I can honestly say that I think this year has been a success. We have faced some trying times, there have been tears and tantrums, good times and bad, but we have made it through the year. 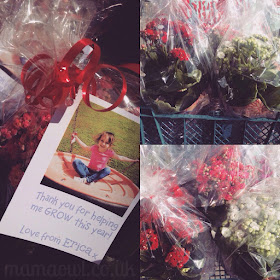 We presented the teachers and TAs with beautiful potted plants as end of term thank you gifts, which we purchased from local garden centre Fairfield Nurseries for only £3 each. The owner, Darren, even gift wrapped them for me. We made our own special thank you labels which read "Thank you for helping me GROW this year" with a photo of the children to tie on to the ribbon, and they were very gratefully received by the staff. 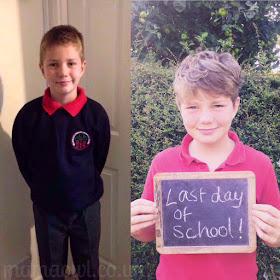 Looking at your children every day, you don't really see the difference in them as they grow until you look back at photographs. I cannot believe the difference in H after this school year, he has grown up so much. He will be starting year 5 in September, and next year it will be time to apply for his secondary school place, to go & visit on an open day.

He's had a brilliant year at school, taking part in the swimming gala and playing on the football team. Next year he is looking forward to swimming in the gala for the school again (he uses his weekly swimming lessons as training!), & being on the cricket team. His end of term report was positively glowing - he has made wonderful progress and continues to make us very proud both through his academic and sporting successes, and also just by being the really lovely, friendly, caring young man that he is. 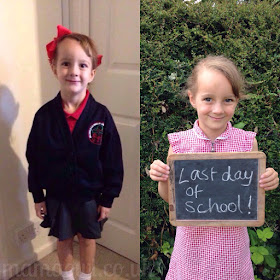 I remember dressing E up for her first day. She looked so tiny stood there in her oversized uniform with a giant red bow on her head, fresh and new and ready to begin her primary school adventure. Now, well in fairness she's not that much bigger but she's grown up in so many other ways & made the most amazing strides in her learning.

On stage 19 for her reading, and at the expected level for all of her EYFS profile goals and exceeding in four of them (including maths, literacy, and physical development which I think is due to her gymnastics training - she is very strong and poised) she has absolutely blown everyone away with her progress. Her teacher was even taking examples of her work to other schools to share with their staff, she is an absolute star and has done so well. She still experiences anxiety in certain social situations and when leaving me in the mornings, but she is an amazing little girl who will soon overcome those difficulties, and we are very proud of her efforts and bravery this year. 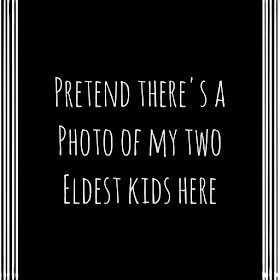 I'm generally discouraged from taking photographs of my eldest two children because we all know how teenagers can be. Unless they're taking selfies for likes or to Instagram their eyebrow or hair game (usually strong, from what I can gather) they don't like the camera anywhere near them. So let me say - A & J have been nothing short of outstanding. A has bagged herself a great new job where she has now been working for several months and absolutely loves it, she has studied for her AS levels around her work hours, sat all of her first year exams and managed to juggle just about everything without too much grumbling about it. Her room is a complete mess, her clothes are everywhere and she never cleans up after herself, but we can't have it all.

J has improved enormously throughout the year, and has proved to himself as well as to his teachers and to us that he has it in him to work hard and do well in his chosen GCSE subjects. His most recent report was a huge improvement on the ones we had earlier in the year and he has put in some real effort during year nine. His grades have improved, his attendance (as for all 5 of them) is excellent and he receives a certificate for it every term & his teachers all had great things to say about him at parents evening. We know he can do it, he just has to keep up his hard work & hold on to that belief in himself.

As for L, that is a whole blog post in itself. I want to tell you all about our year seven experience from the perspective of a child with Autism, all of the difficulties that we have faced & how we've worked to overcome them. This year's been a real rollercoaster for him and for us, and I'll be sharing the ups and downs of the ride very soon.

Now - it's time to enjoy our well earned Summer holiday. Have a wonderful break!
mamaowl at 07:00
Share