And though she be but little, she is fierce | #LoudnProud

There is nothing E enjoys more than flinging herself around the living room with wild abandon - cartwheeling, forward rolling, hand springing... Kick overs, walkovers, and handstands are practised daily, over and over again, until she can do whatever it is that she has set her mind to. She has been doing gymnastics for a couple of years now, first starting in the preschool group aged three learning lots of basic tumbling skills and how to move around on the different apparatus. On her fifth birthday she moved up to the beginners group and started her badge work. She quickly completed badge eight and has now just completed badge seven today. 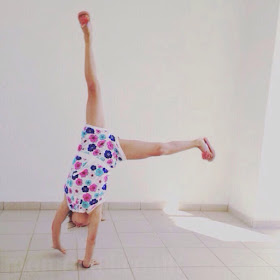 Last month her gymnastics club invited girls from the recreational classes to take part in trials for places in their development squads, which E was keen to do. Her dad took her along to the trial as it was arranged for the same day as H's guard of honour for the 1st XV team at his rugby club and I'd already promised him I would stay, so unfortunately I didn't get to watch her but I knew she would try her best.

We found out whether or not she had earned a place the following week with a letter home after her class, and was absolutely delighted to find out that she had been offered a place in the "mini squad". She has now started her squad training which is two hours a week at this stage, and she still attends her hour long rec class at the moment too.

I'm so proud of how hard she works to master new moves, and how keen she is to try everything and give it her best. Her bravery astounds me, watching her swinging around on the bars, flipping over backwards on the mats and tiptoeing across beams makes my stomach lurch - she's so small but she is fearless, and so strong. I can't wait to see how far her training takes her and to see what she will achieve in the mini squad.

And she's done it! Without slipping over 😊🙌🏻 check out that triumphant look on her face haha #gymnastics #walkover
A video posted by jooleroo (@jooleroo) on Oct 15, 2015 at 10:29am PDT


#LoudnProud is taking a break over Christmas and New Year, but will return in 2016 with 3 Children & It on Thursday, January 7th.