My eldest will be 18 years old this July. In that time, there have been many things that have made me go 'hmm' in relation to parenting. Also - 'Aargh!', 'Noooooo!' and 'WtAf?!'. Lots of deep breathing and eye closing and slow counting to ten needed on occasion, such are the joys of raising children, especially teenagers. It doesn't get easier as they get older, sorry. I like to share the highlights of my week on Facebook from time to time, status updates that fully encompass what it is to raise children and how they like to make it fun for us. Facebook gets a bad rap, being called 'bragbook' and passive-aggressive memes being posted about who posts what. I just choose to say it how it is.

I will tell you now - I bake with my kids. We enjoy home-made meals that they sometimes help me cook. We spend afternoons cuddled up on the sofa reading books and watching movies together. We enjoy great family days out and holidays. We love each other. We have fun. In the interest of balance - sometimes I can't be arsed/simply don't have time to cook after all the daily running about & they get fast food or the bag of emergency chips from the freezer with whatever I can find in the fridge or cupboard. I spend about 25% of my time refereeing various spats, topics of which include but are not limited to 'He's breathing too loud, she's looking at me' etc., the other 75% is spent picking up/running around behind them. I go away without my kids. Sometimes they drive me completely bloody crazy. But we still love each other.

So for fun, here are just a few of the things I have had to endure in recent months. This does not include the time J kicked his shoe off apparently into thin air (later found up a tree) and I had to take another pair in for him otherwise he would have been hopping home, nor the time that he got caught scaling the fence with his buddies to ditch the end of term assembly which he's now had 3 after-school detentions as punishment for. My favourite thing about sharing these status updates is reading the comments after - 'I feel your pain!', 'Glad it's not just my kids', 'Sounds like my day!', 'I feel so much better reading this, makes me feel normal'. Hang in there ladies and gents, we've got this.

18 January at 16:02
Seriously considering forming our own travelling circus... The boys can be the contortionists since they usually have their heads up their arses (today is no exception), E can do a bit of trapeze, and A can be the freak since she came home with a metal bar through her face on Saturday. Might as well make some money out of them, help pay for the gin. 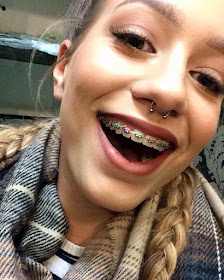 8 January at 21:00
The joy of having teenagers - one of them came home from school with bright blue hair today. Sometimes it's just best not to ask.

23 December 2015 at 12:32
My three sons have just willingly worked together and tidied the bedrooms without being asked, including hoovering, and making of the beds... If it wasn't almost Christmas I'd be convinced that the apocalypse was upon us.

21 December 2015
Please tell me that it's not just my kids who are feral this week? Ridiculously over excited, I'm having to peel them off the ceiling every hour or so - I think there's a very real danger of their heads exploding by the time we get to Friday.

20 December 2015
Currently wondering where the hell E found a bloody bell and why she is choosing today to ring it incessantly. Going to have to lose that behind the sofa later. No, YOU'RE hungover.

10 December 2015
Some of my favourite phrases to hear first thing in the morning are "I've got PE today, where's my shorts/trainers/rugby top (delete as appropriate)", "I have to dress up like a book character/evacuee/Victorian school kid/it's non uniform today and I want a specific item of clothing, where is it?" and today my particular favourite, "Oh I forgot, there's a hole in my trousers - can you sew them up?"... 10 minutes before the school bus.
Nothing that you could have told me the night before, then.

2 December 2015
“Mum can we put the tree up? Mum can we do the decorations? Please mum! Please! Please can we have the Christmas tree up!?” - all of the kids, every hour, for the last two days. Get the tree & decs out of the loft... Everyone pisses off and leaves me sat here decorating the bloody thing on my own.

24 November 2015
I told H to shower and change after football club today, he asked what he should put on. I suggested a clown suit, to which he replied “Why do you want me to wear your clothes?”... Torn between being annoyed because he's a cheeky sod, and impressed with his quick wit.

19 November 2015
A successful day of parenting teenagers I think — one has been sent home from school after a bad afternoon (the less said about that the better), one should probably have just slept there this week since he's spent almost every afternoon in detention, and the other has had a letter sent home questioning her attendance since she apparently doesn't bother signing herself in.
If anyone needs me I'll be rocking back & forth in the corner of a darkened room. 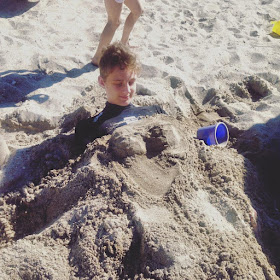 24 October 2015 travelling to Kos island - GREECE from Heathrow
I had to drink H's bottle of water at security... The kids thought it amusing & appropriate to chant "Drink! Drink! Drink!" as I did so. Thanks for making everyone in the terminal judge my parenting, guys.

27 September 2015
One day I would like to sit on the sofa without every member of the household (including both dogs) inviting themselves to come and sit on my lap.

22 September 2015
Waking my boys for school this morning — nice & gently whispering to them, stroking their hair and telling them it's time to get up... L opens his eyes, and says "Are you watching me sleep, you creeper?".
That's what I get for being nice. Tomorrow it's an air horn.

16 September 2015
Two weeks into the new term and I've already had letters from the senior school for trips totalling over £200 so far. If anyone is after organs, limbs or sexual favours, now is the time to ask.

9 September 2015
L was holding this sign up in his classroom window yesterday keeping passers-by entertained, A happened to walk past outside and catch him. Delightful isn't he. 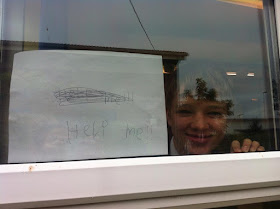 Please do share your 'ugly truths' below, I could do with a laugh. If I didn't, I might cry.