The Camp America Experience - the adventure of a lifetime? 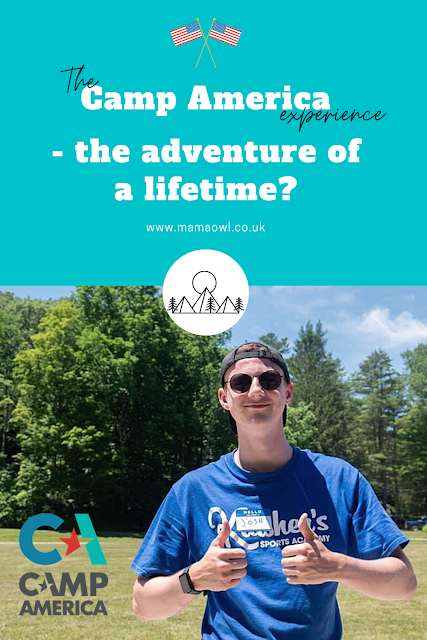 J has always been into sports, mostly football, which he has played since he was little. His Dad has coached him from when he was just a little boy up until he started to play senior football, and then eventually they got to play on the same team together which was a memorable experience for them both. He knew he wanted to work in sports and leisure post-GCSE, so he went on to study sport, health and fitness at college after he left school.
For two years he worked hard, even travelling to Seville in Spain for study and training for three weeks as part of the Erasmus+ scheme. As we approached the end of his second year of college, his Dad and I paid for him to take his NPLQ - the National Pool Lifeguard Qualification - as another string to his bow. It was a very intensive course, and I think it is very underrated in how difficult it is. He passed it and became a qualified lifeguard just a couple of months after his 18th birthday.

We had discussed the possibility of him spending a summer with Camp America as a camp counsellor for several months, and so as his final year of study came to an end he applied, and attended an interview in Bristol after answering an online questionnaire. It was very informal, a chat in a coffee shop to go over his application and to to ask any questions he might have about CA, and the chap was very friendly and helpful. He passed the interview, and we began the next stage.

Camp America make the process very simple, everything is done step by step and they have a great team available to help if you get stuck anywhere along the way. J filled out his application which is all done online, got references from his tutors and employer, and we made a short video all about him and his interests to show prospective camps. You want to make an impact, and to show them who you are and what you're about so a video is a great addition to your application but not a requirement. Before we knew it he had two offers of a placement. The first one was not suited to him, but the second was absolutely perfect - a lifeguard placement at a sports camp! An online interview with the camp directors followed and he was hired. 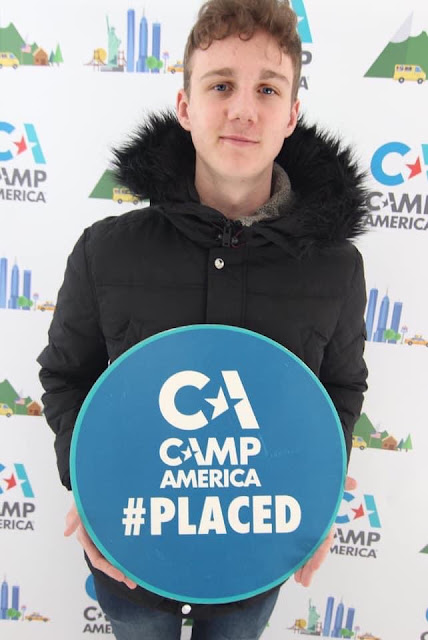 The following week he got the bus to London and attended an open day style event where camps have representatives available to chat to and interview for placements even though he was already placed, because we'd bought his bus tickets already and we also thought it would be good for him to connect with others who would be travelling to the USA and to speak to some Camp America staff in case he had any more questions. It meant he also got to have his #placed photo!

After his placement was confirmed, J needed to complete some important aspects of his application. A medical carried out by his GP (a simple appointment with basic health checks and questions), his DBS check to make sure he was suitable to work with children, and then finally his U.S. visa application. Camp America charge a fee to make all of the arrangements which covers flights (unless you choose to arrange your own flights) and the majority of the application admin, however things like the DBS and visa cost extra on top, as expected, and this can vary depending on your area. I think all-in, as a first-timer it cost us around £800 - it usually costs less for returners. In my opinion it was worth it to have step by step help throughout the process.

Completing the student work visa application was a bit laborious but straightforward enough, and we had to take photos to accompany his application. Our local Tesco have a photo machine which prints them the appropriate size, as they are slightly larger than our standard UK passport photo sizing. We made his appointment online, and his Dad travelled with him to the embassy for his interview. It was a brief interview though a little daunting to be at the embassy, but he gained his approval and he left his passport there to be checked & stamped ready for him to travel in June - it was returned to us by courier. When he got home, we ticked off 'approved' on his Camp America account and waited for his flight information. It was done - he was going to the USA! 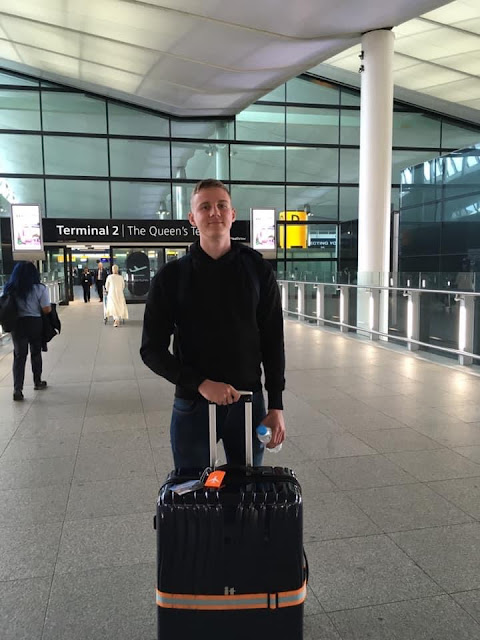 CA arranged all of his flight details and accommodation when he reached the United States, we just had to book his journey from NYC to camp which was around two hours by bus. The day he left for the USA he still had to sit his final college exam, so that morning his Dad and I dropped him off at college and then went and had breakfast while we waited. When he was done we picked him up and drove straight to the airport to drop him off ready for his flight. I cried all the way home, and had all through the airport too - my husband wouldn't even walk with me I was that bad. He flew out to New York, and the Camp America reps picked him and other counsellors up stateside, and took them to their hotel for the night. The next day, they all headed into NYC together for a wander around the city before heading off their separate ways to their camp placements. J hopped on a bus to the Berkshires in Massachusetts, to Kutsher's Sports Academy which was his home for the summer.
KSA have an amazing summer camp programme and offer absolutely every type of activity you could think of at a breathtaking location on Lake Buel in Great Barrington, Massachusetts. The camp counsellors stay in cabins with the campers and have their own groups that they are in charge of for the duration of the camp session. Campers come from all over the world to stay at KSA, which is unsurprising considering the high quality of care and activities on offer. The counsellors have regular rotational time off from duties, and J made some friends for life after a busy summer of working and living together. It was your typical American summer camp experience - s'mores on the beach, swimming in the lake, a cabin in the woods. Homesickness is something to be mindful of, and J had one occasion about six weeks in where I think he felt a bit tired and missed his family, but KSA took great care of him and the next day after a chat with the program director he was back raring to go.
He spent his days working at the lake, visiting theme parks, playing games, and there was even a couple of trips to the malls for some shopping. The kids would put on shows, and KSA shared so many pictures and videos that I almost felt like I was there - I loved being able to see J and what was happening at camp because as some of you may know, teenage boys are not great at giving updates or sending photos... I loved having that connection and would log in to the site every day to see what pictures were up and what everyone had been getting up to. 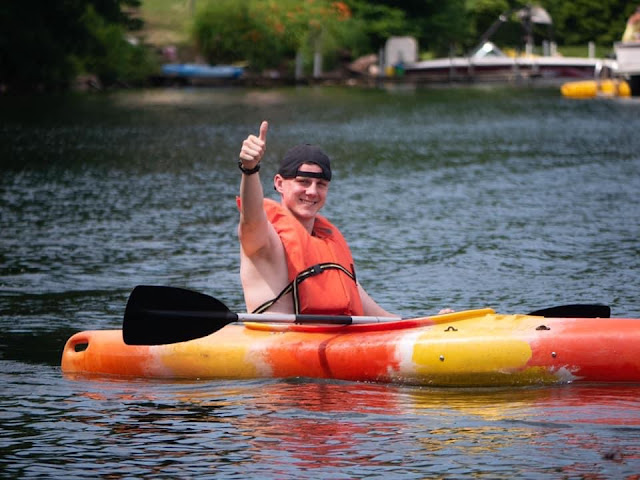 J was paid for his work at camp, in two instalments. He had been working two part-time jobs alongside his college studies so had saved some money to take with him, and we agreed to support him financially while he was away if required and we would sort it out when he got back. He didn't need a great deal of money during his time at camp as his accommodation and meals were all included.
Working at camp gave him excellent practical experience as well as the opportunity to travel. After finishing his exams and leaving college in June he would have then needed to get a full-time job while he waited for his results. By applying to Camp America, he was able to make the most of his 'last' carefree summer before a job and responsibilities, to see a bit of the world, and to be independent. Before he left he got in touch with a local leisure centre to ask about potential employment opportunities when he returned in September and was told they'd be happy to hear from him when he got back.
KSA camp began in June and ended in August, when it came to an end he and his new friends got on a bus and headed off to Boston to start their three-week adventure around the USA. He managed to cover an impressive 10,596 miles and visit 7 states in that time, hopping flights (11 in total) all over the place with his camp buddies, before meeting up with friends from home who were also in the U.S. but at different camps. 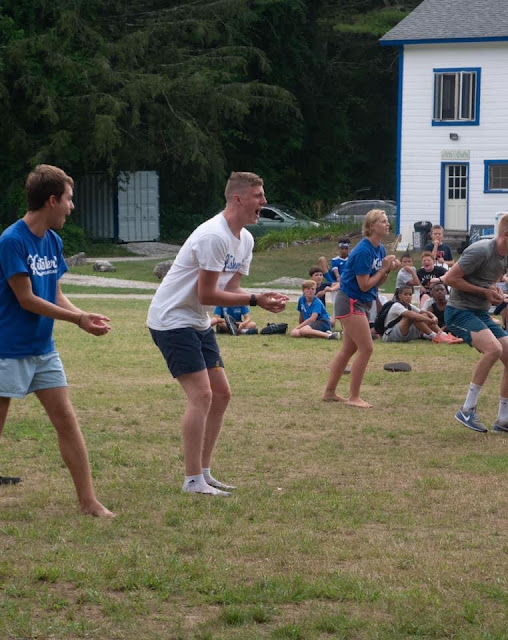 Spending a summer with Camp America was - I think - the best thing J ever did. When he returned he had grown up so much. He was independent and responsible, and ready to enter the world of work. He contacted the leisure centre again when he got back and as promised they invited him for an interview - which he slept through because jet lag is a real thing, you need to give yourself some time to readjust when you get home. Luckily they were very understanding and he rearranged, and got the job! A year on he is very happy there, working full-time and saving for the future - a house, a car, travel or all of the above. All I know is CA gave him skills for life and it was well worth every penny spent (which he paid back in full by January after his return). University wasn't for him, and this alternative path into adulthood, education and employment has been a very successful one. 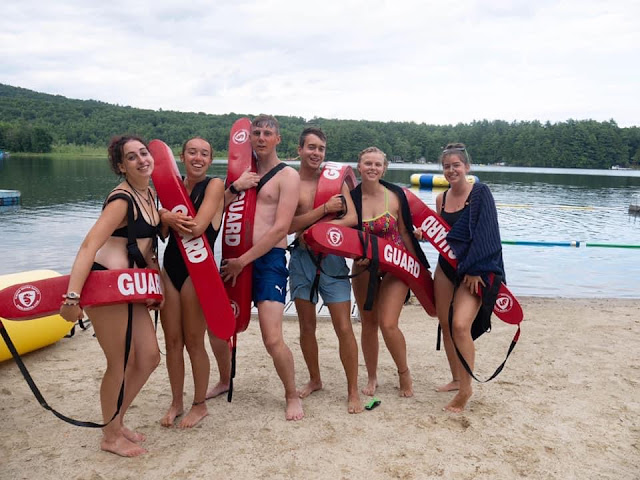 I'll be sharing J's top tips for a summer with Camp America, along with some FAQs, and details of his post-camp travel adventures in future posts. If there is anything you'd like to know about Camp America and his experiences, please leave a comment below. In the meantime - see if you can spot him in the 2019 KSA camp staff video!
mamaowl at 12:52
Share